In v11.2, Logi Analytics introduced a new family of charting elements that offers a number of improvements over the legacy Static and Animated chart elements. The new Chart Canvas charts are discussed in this topic.

The Chart Canvas chart elements are based on a library written entirely in HTML5 and JavaScript, and work very well in all modern desktop and mobile device browsers. No client-side technology, such as Flash or Java, is required. These elements provide a wide range of features and the flexibility to customize them to your requirements. Many desirable features, including animations and quicktips, are enabled by default, making it very easy to create great-looking charts quickly. In addition, these charts are exportable in reports.

The legacy Static and Animated charts available in earlier versions of Logi products remain available but will eventually be deprecated. Developers are advised to begin using Chart Canvas Charts for their new projects.

Chart Canvas charts are used by default for Super Elements, such as the Analysis Grid, in all new applications started in v11.2.040 and later. Older Logi applications that are upgraded to v11.2.040+ will use the classic static charts for their Super Elements. To force upgraded apps to use Chart Canvas charts, add the constant rdFavorChartCanvas = True to your _Settings definition.

The following image explains many of the terms used to describe a typical Chart Canvas chart: 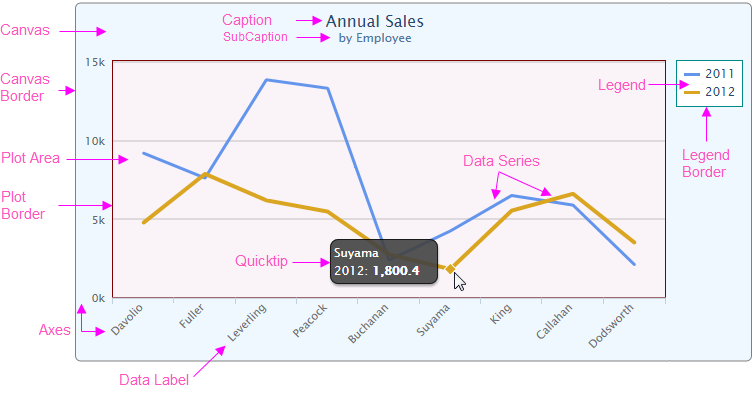 The background color, line properties, and transparency of the areas and lines shown can all be controlled by setting attributes. Additional major and minor tick marks, and grid lines can be added. The spacing, style, and format of all the items shown can also be configured.

Chart Canvas charts are incredibly easy to use! All you need to do to create a chart is add two chart elements, set two attributes, and include a datalayer.

No other chart element attributes need be set - everything else will be done automatically for you. 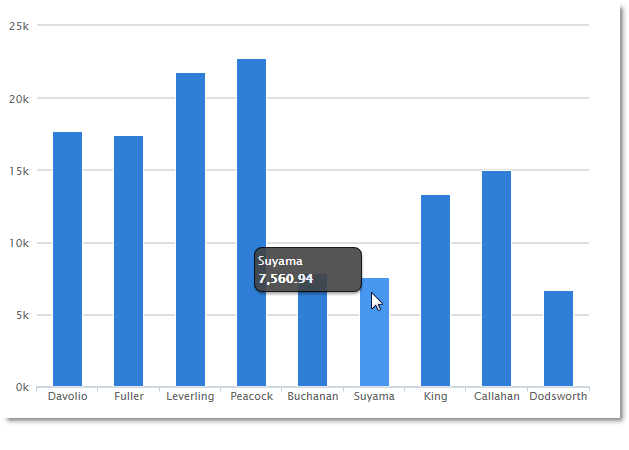 The resulting chart will be automatically-sized and styled, and will include hover-highlighting and quicktips, as shown above.

Now let's dig into the elements we used, and others in the Chart Canvas family.

The Chart Canvas element is the parent, or "container", for all of the other elements used in these charts. As such, its attributes specify the size and appearance of the overall chart, the canvas, and the plot area. Here are its attributes:

It's recommended that you set a unique element ID for charts if there will be more than one chart in a definition.

The example shown earlier used a datalayer beneath the Chart Canvas element, which makes the data retrieved available to all of its other child elements.

However, as shown above, instead of using a common datalayer, you can use individual datalayers beneath the child elements, where appropriate, to give them their own data.

As shown in the example above, when using Chart Canvas charts as the child of an element that has its own datalayer, such as a DataTable or Google Map, you must use @Chart tokens, not @Data tokens, in any elements used to condition the chart's datalayer.

The Chart Canvas element also uses the following child elements to generate, control, and format the canvas and charts. Click the element link for more information.

If no colors are specified for a Series and no theme has been applied, the following colors will be used, in left-to-right order:

If more than ten colors are needed, colors will be re-used, starting from the left again.