The Chart Canvas element's Series child elements cause a data visualization (the chart) to be rendered in the canvas. This topic discusses the Series.Funnel element.

The Series.Funnel element generates a Funnel chart, which displays values as progressively decreasing proportions. The size of each funnel segment is determined as a percentage of the total of all values.

The example above shows Funnel charts, without and with side labels.

As shown above, the chart is created by adding Series.Funnel to the canvas, along with a datalayer. Very few attributes need to be set for the Series element in order to produce a basic chart.

Note that a datalayer element can be used either beneath Series.Funnel, as shown above, or beneath Chart Canvas. If used as a child of Chart Canvas, its data is available to all child Series elements. This can improve performance if you have several series, all using the same data, beneath the same Chart Canvas element.

When the Label Location attribute has been set to SideLayout, as in the example, the labels can be styled using the Side Label Style element, as shown above.

Funnel charts do not generally lend themselves to use with other series types, but it is possible. You can add additional series to the chart by adding additional Series elements: 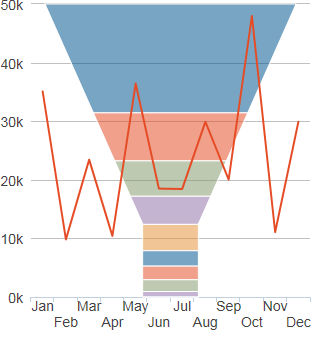 The example above shows Series.Funnel with Series.Line. The funnel's transparency has been set to allow the grid and data lines to show through it.

The example above shows the two Series elements and their datalayers, used to produce the previous chart. You can adjust which series appears "in front" of the other in the chart by changing the order of the Series elements in the definition. The funnel's Transparency attribute has been set to allow the grid and data lines to show through it.

The Series.Funnel element has the following attributes:

A "data label" is text that can be shown adjacent to each funnel segment, that shows its X-axis data value. This is controlled using the Label Location attribute. 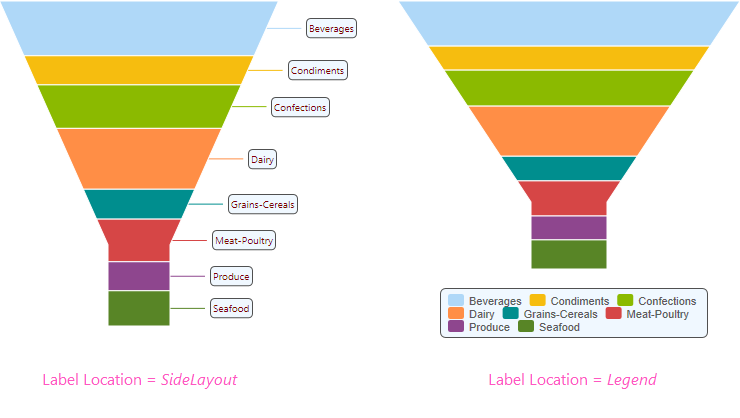 As shown above, labels can be placed beside the segments, or in a legend, or not shown at all.

When the legend option is selected, "legend filtering" is active: clicking a segment's entry in the legend will toggle its appearance in the chart. For more information about legends, see Legend.

When working with labels beside the funnel, you may need to adjust the Chart Canvas element's Spacing Left and Spacing Right attributes to "fit" all of the label text inside the canvas. 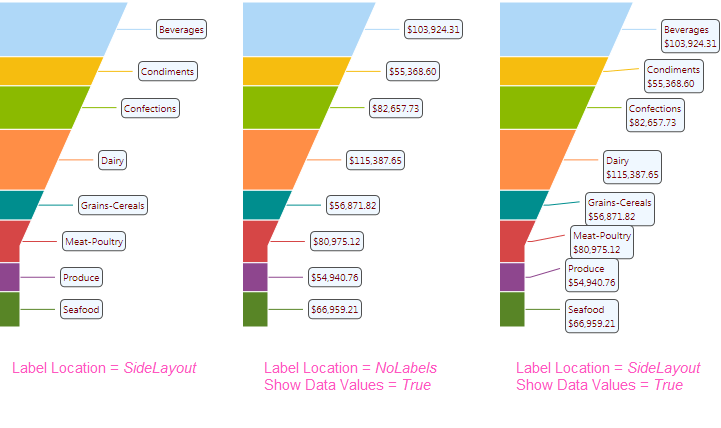 If you want to show the data values instead of, or with, the data labels near each funnel segment, as shown above, use the Series.Funnel element's Label Location, Show Data Values, and Show Data Values Format attributes.

By default, a "quicktip" is displayed when the mouse hovers over a funnel segment: 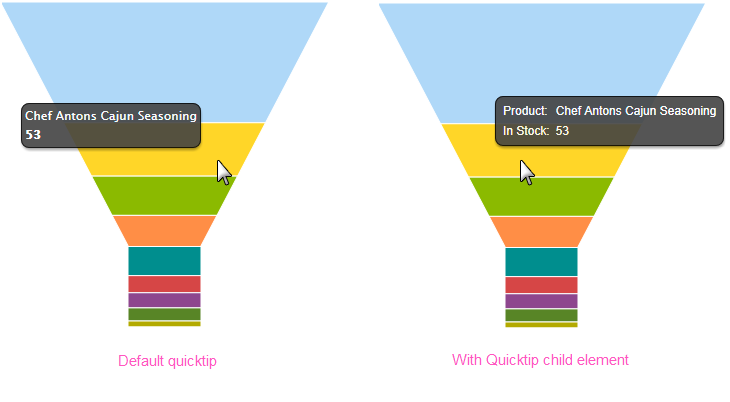 The automatically-generated quicktip displays information for the X- and Y-axis, as shown above, left. However, you may want to display other information or format it differently, perhaps as shown above, right, which can be done by adding a Quicktip child element beneath Series.Funnel and setting its attributes and child elements. Use @Chart tokens to include chart data in the quicktip. Intrinsic functions are supported in the Quicktip attributes.

Action elements initiate processing of a report or process task definition, redirection to a link, or other processing when a segment in the funnel is clicked.