Polar charts were added to Logi Report in v10.1.59

In a traditional line chart values are plotted along the X and Yaxes, with their positions designated by the familiar Cartesian, or horizontal and vertical, coordinates. In a polar chart, data points are plotted using "polar" rather than Cartesian coordinates.

A slight style variation provides the "radar" or "spider" chart, which connects its tick marks with straight, rather than curved, lines yielding a spider web-like appearance.

Multiple data sets can be plotted simultaneously as layers, with transparency helping users to "see through" overlapping areas. This allows quick comparison and assessment of data. 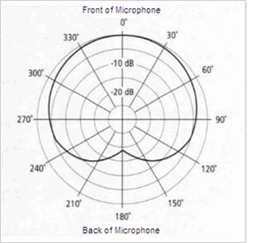 Polar charts are often very useful for present data that uses a natural cycle such as daily temperatures or annual rainfall. They're also frequently used in scientific and mathematic applications.

Consider the polar chart at the left. It shows the "sound pick-up pattern" for a particular type of microphone. The black line inside the chart plots how well the microphone picks up sound.

As you can see, the microphone is very good at collecting your voice if you stand directly in front of it.

Which is good, as this is what the microphone was designed to do; on a stage with other musicians and with an audience out front, this microphone will focus fairly exclusively on a singer's voice. And the polar chart shows this quite clearly.

The following images illustrate the chart types and styles available in the Chart.Polar element. All of the examples, except the last two, have been plotted with the same polar-style and a single dataset: 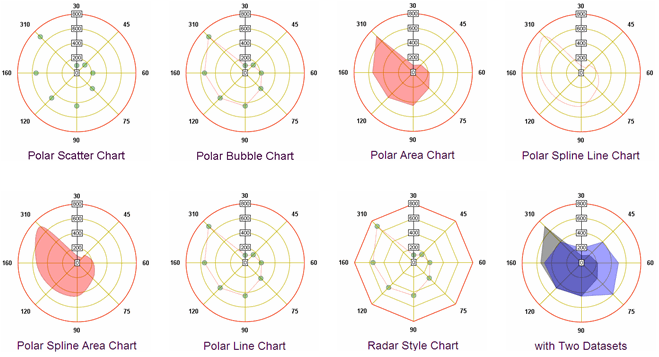 The last two examples show a "radar-style" chart and a polar-style area chart with two overlapping datasets (or layers). As you can see, Logi Studio provides a useful variety of styles with this new element. As with all Logi charting elements, special child elements are available to control the formatting of the borders, lines, areas, data labels, legends, and titles in polar charts.

The Chart.Polar element has the following attributes:

A number of elements make up the family used to create heat maps. Each element, its function, and its special attributes are discussed below: