The Chart Canvas element's Series child elements cause a data visualization (the chart) to be rendered in the canvas. Series elements include a Legend Label attribute that let you specify the text that appears within the chart legend for this data. If one or more Series elements has a value in this attribute, a horizontal legend will be displayed; otherwise no legend is displayed.

Chart legends provide visual clarity when multiple series are used. The Legend element can be used to control many aspects of the legend display. 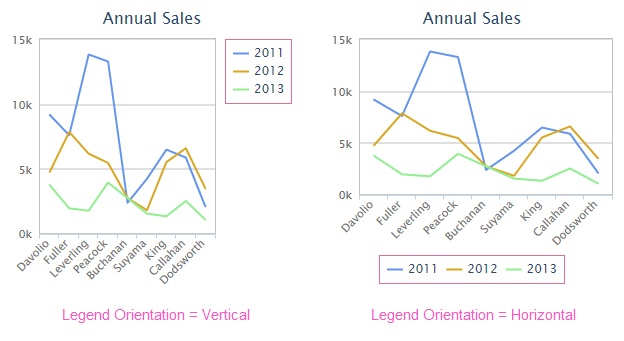 In the example above, legends are shown in Vertical and Horizontal orientations, which is set using Legend element's Orientation attribute. Note that the plot area is automatically scaled to accommodate the inclusion of the legend within the canvas area. 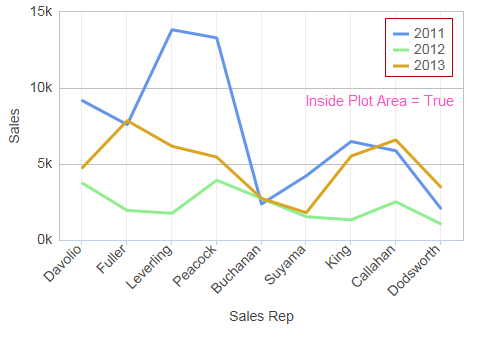 In the example shown above, the Legend element's Inside Plot Area attribute has been set to True, moving the legend inside the plot area. Additional fine positioning has been done using the element's Offset X and Offset Y attributes.

The Legend element has a variety of attributes that can be used to customize its border, background, positioning, symbols, and more. These are described in detail in a following section.

Even if the Legend element is included, the legend will not be displayed if there is no data to be charted.

Legend "filtering" allows users to toggle the display of series at runtime, by clicking on legend items: 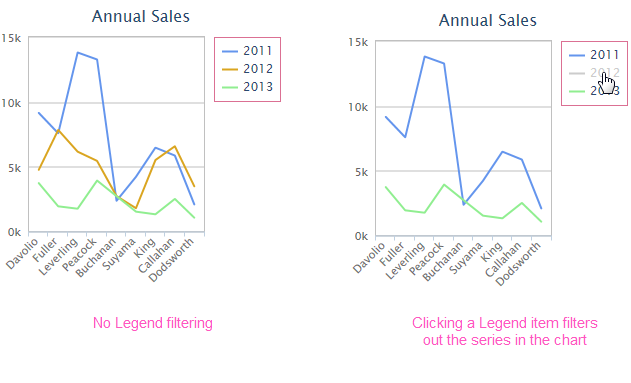 In the example above, the 2012 series is hidden by clicking its legend item. Clicking again will redisplay the series. Legend filtering is a standard feature that's always enabled.

The top-to-bottom order of the items in the legend, by default, is the same as the order of the Series elements in the report definition. This order can be reversed by setting the Legend element's Reversed Item Order attribute to True.

The Legend element has the following attributes:

The Legend's Caption attribute can be set to place a caption inside the Legend: 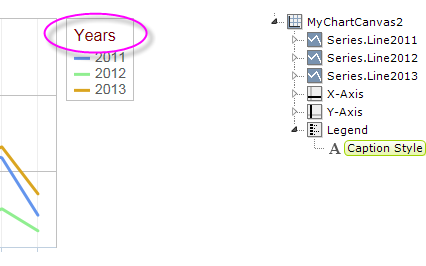 As shown above, the Caption Style element can be added to configure the caption's font family, color, size, and weight.

The text of the legend items can be styled using the Label Style element: 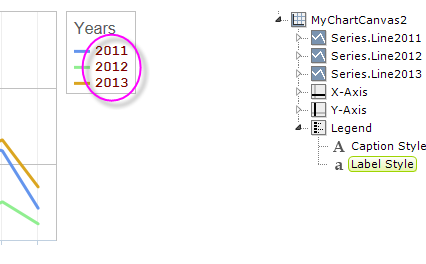 As shown in the example above, this element can be added to configure the legend items' font family, color, size, and weight. 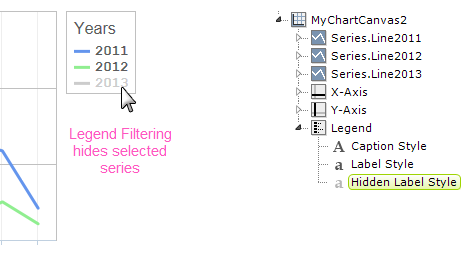 A related element, the Hidden Label Style element, is used to configure of the font family, color, size, and weight that's used when a legend item is clicked to engage Legend Filtering, as shown above. The color affects both the item symbol and the item text and, without the element, defaults to light gray, as shown above.

In this case, as shown above, the legend items will automatically be placed in a scrolling list within the legend, and up-down navigation arrows and a "page counter" will appear. The Legend Navigation Style element can be added beneath the Legend element to control the color and size of the navigation arrows.