The Chart Canvas element's Series child elements cause a data visualization (the chart) to be rendered in the canvas. This topic discusses the Series.Heatmap element.

The Series.Heatmap element generates a Heatmap chart, sometimes called a "tree map", which uses a unique arrangement of rectangles to represent data and relationships, using color and size. 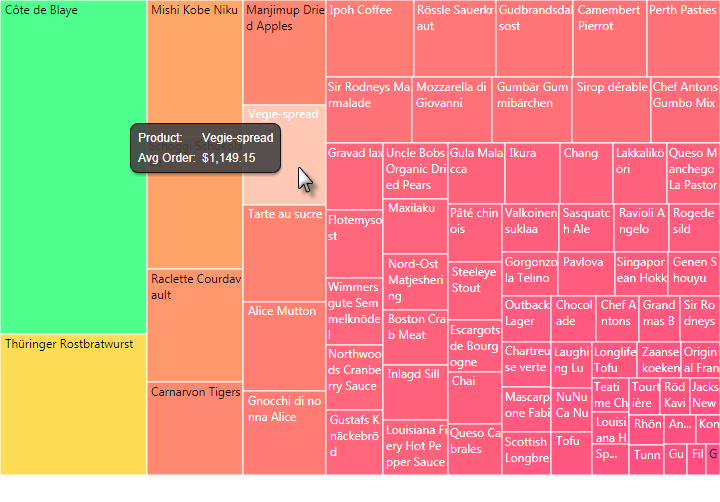 Both the color intensity (shifting within a range) and the size of the rectangles indicate relative performance, helping you to easily spot trends with a glance. This type of chart is very useful for showing hidden trends and relationships. 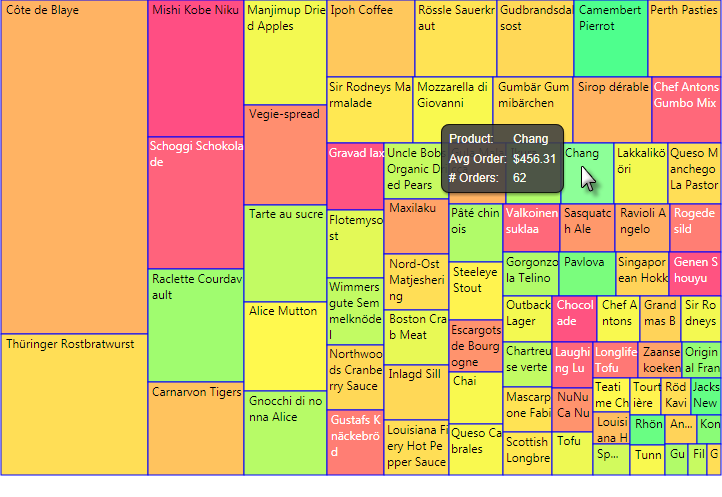 The example above is the same data but now the cell color reflects the number of orders. "Greener" cells have a higher number of orders. This allows us to compare an item's popularity (size) to its average order value (color).

As shown above, the chart is created by adding Series.Heatmap to the canvas, along with a datalayer and, typically, some child elements that may include a Group Filter, and a Group Aggregate Column element. Very few attributes need to be set for the Series element in order to produce a basic chart.

Note that a datalayer element can be used either beneath Series.Heatmap, as shown above, or beneath Chart Canvas. If used as a child of Chart Canvas, its data is available to all child Series elements. This can improve performance if you have several series, all using the same data, beneath the same Chart Canvas element.

The Series.Heatmap element has the following attributes:

You can also group cells in a Heatmap using the Heatmap Group element: 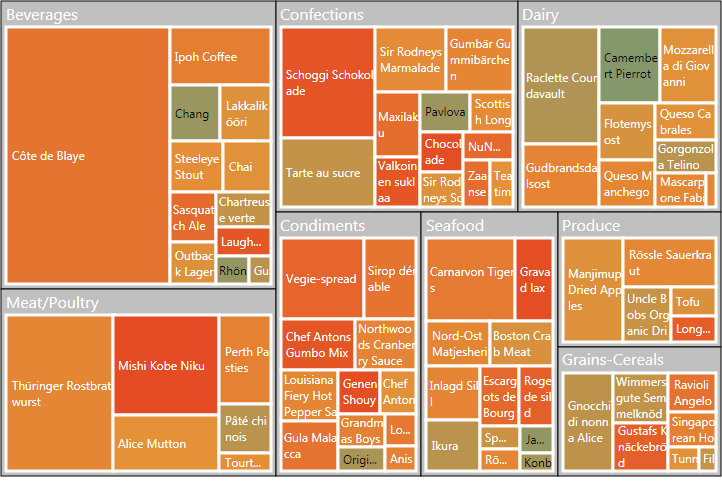 In the example above, the products have grouped by category. In order to use grouping, you must ensure that your datalayer includes the appropriate data. The Heatmap Group element allows you to control the appearance of the group title font, title alignment, borders, and background color.

The Heatmap Label Style element can be used to control the appearance of the label text that displayed inside the cells: 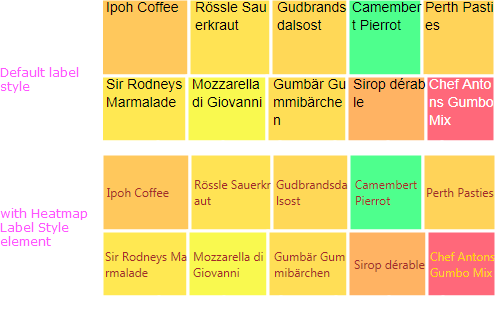 By default, labels will appear at the top of the cell, as shown above, top. The Heatmap Label Style element has attributes that allow you to control the font family, color, size, and weight, and positioning of the text. You can also specify different font colors for cells with light and dark backgrounds. 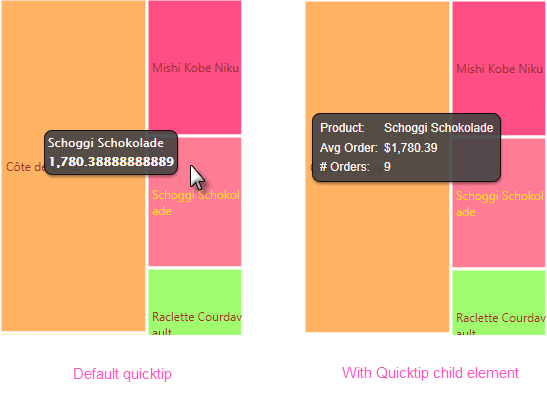 The automatically-generated quicktip displays information from the label and size data columns, as shown above, left. However, you may want to display other information or format it differently, perhaps as shown above, right, which can be done by adding a Quicktip child element beneath Series.Heatmap and setting its attributes and child elements. Use @Chart tokens to include chart data in the quicktip. Intrinsic functions are supported in the Quicktip attributes.

A default quicktip is also displayed when a Heatmap Group element is used. To customize it, the Quicktip element can also be a child of Heatmap Group.

A variety of Action elements are available for use with the Series, including Action.Link, Action.Process, and Action.Refresh Element. Additional Action elements will be added in future releases.

Action elements can be also used beneath the Heatmap Group element to provide drill-down and drill-through functionality when group titles are clicked.