The Chart Canvas element's Series child elements cause a data visualization (the chart) to be rendered in the canvas. This topic discusses the Series.Whiskers element.

The Series.Whiskers element, introduced in Logi Info v11.4.046 generates graphics which, when used with other Series (usually Series.Bar Range), represents the variability of the data. It's most often used to indicate the uncertainty or the "margin of error" in the data. 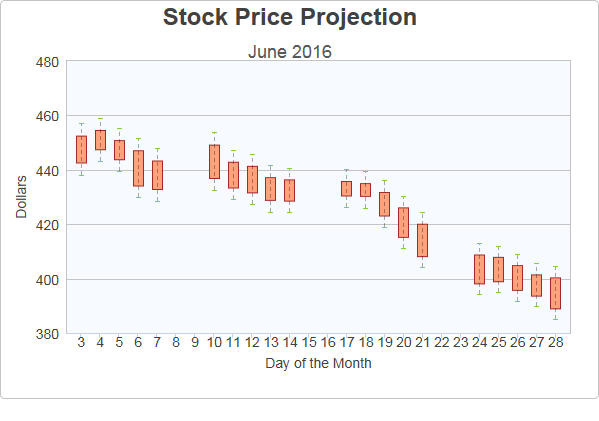 The example above shows a Bar Range chart, representing projected stock prices for a month, with "whiskers" showing the margin of error in the projections.

As shown above, the chart is created by adding Series.Bar Range and Series.Whiskers to the canvas, along with a datalayer and, typically, some datalayer child elements that may include a Group Filter, and a Group Aggregate Column element. Very few attributes need to be set for the Series element in order to produce a basic chart.

Note that a datalayer element must be used beneath the Chart Canvas element because, unlike other Series elements, Series.Whiskers cannot have its own child datalayer. Both series will then use this datalayer.

The Series.Whiskers element has the following attributes:

By default, a "quicktip" is displayed when the mouse hovers near or over a stem or whisker line. This is separate from the quicktips which are displayed for the chart bars. 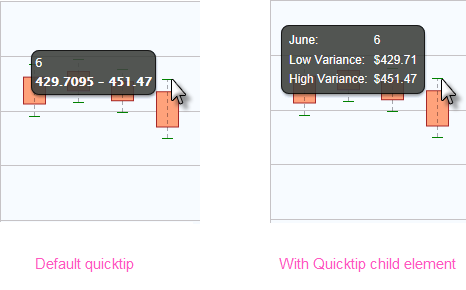 The automatically-generated quicktip displays information for the low and high values, as shown above, left. However, you may want to display other information or format it differently, perhaps as shown above, right, which can be done by adding a Quicktip child element beneath Series.Whiskers and setting its attributes and child elements. Use @Chart tokens to include chart data in the quicktip and intrinsic functions are supported in the Quicktip element attributes.

Action elements initiate processing of a report or process task definition, redirection to a link, or other processing when the stem or whisker line is clicked.

In the example above, an Action.Report element has been added as a child of Series.Whiskers, along with its Target.Report and Link Parameters child elements. To reference chart data in parameters, use the @Chart token, as shown above.

A variety of Action elements are available for use with Series, including Action.Link, Action.Process, Action.Refresh Element and more.