Logi Info includes the Logi Scheduler, which allows Logi applications to be run by administrators on a scheduled basis. Scheduling features can also be embedded in reports, allowing runtime scheduling by end users. This topic introduces these features.

About The Logi Scheduler

In simple terms, the Logi Scheduler is a proprietary service that runs "in the background" as either a Windows Service or a Linux/UNIX daemon. It maintains its own database of scheduled events and runs them at the desired times and intervals. The Scheduler service has no user interface of its own, but is instead directed to create, maintain, and delete scheduled events by other applications through an application interface.

This service is configured to start up automatically when its host server is started and therefore runs without user intervention. From a performance perspective, it consumes very few resources on the server and spends most of its time idling.

When the Scheduler "runs" an event from its database, it does so by opening a new web server session and calling a specific task in a Logi Info Processdefinition. That process task can then run reports, send emails, etc. - any of the usual task-driven activities. Logi Report does not support process definitions, therefore the Logi Scheduler is not included with it.

This topic concerns itself primarily with the preliminaries: understanding the Scheduler service and installing it. A sister topic, Use Logi Scheduler, is also available with more detailed information about how to configure the Scheduler and work with it from within a Logi application.

In addition, there are two sample scheduling applications available from DevNet that can be downloaded and examined for a better understanding of the elements that support the Scheduler. One of these, Scheduler Console, is designed for administering the Scheduler on your server; this is the primary tool we provide for this purpose. The other sample application is an example of a report that allows end users to schedule reports at runtime.

Prior to v9.5, scheduled reports were managed using the Logi Server Manager, a tool that was separately installed with your Logi product. In later releases, this tool is built into Studio and is no longer used for scheduled task management.

For the sake of clarity, the following terms are used in this Scheduler topic:

The Scheduler is supported by special elements for both report and process definitions and these are introduced later on. 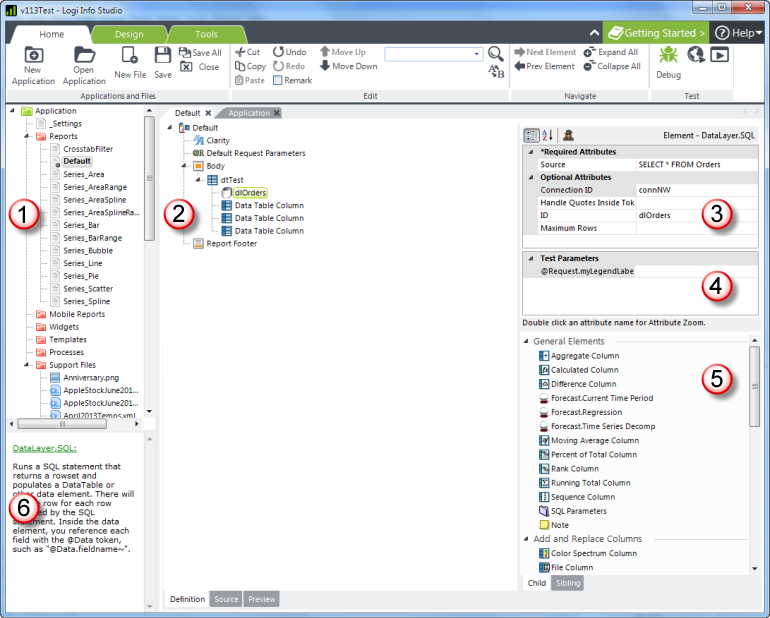 As shown above, you must click the icon next to the Scheduler item and select "This feature will be installed on the local hard drive." from the drop-down list of options. Note that there are separate schedulers for .NET and Java applications.

By default, the .NET scheduler files will be installed to: C:\Program Files\LogiXML IES Dev\LogiXML Scheduler Service. In the rest of this topic, the installation folder you specified, the default or a custom location, will be abbreviated as <installFolder>. 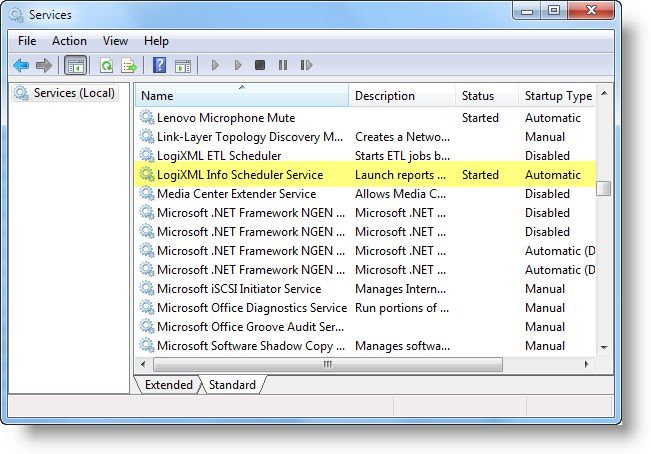 After installation is complete, you can use your Windows administrative tools to examine your services. The LogiXML Scheduler Service should appear as shown above, its status should be "Started", and it should be configured to start automatically.

Due to the flexible nature of the Scheduler and its interactions with Logi Info applications, you can install the Scheduler on a different server than the application web server, separate from Logi Info, if desired.

If you're planning to use the Scheduler to run secure Logi applications that use the "AuthNT" authentication source, then you need to configure the Scheduler service to log on using an account that can be authenticated in the domain. The default installation configuration uses the Local System account, which is only valid on the local machine. This configuration is independent of setting the Run As name for Scheduler tasks or the Scheduler User Name in the _Settings definition.

If the Logi application is using any Active Directory groups to filter domain users, then the domain account used by the Scheduler must also belong to those groups. The account doesn't have to be an Administrator on the server running Scheduler, but it does need these minimum permissions to access the Scheduler database, log errors, etc.:

To change the account being used by the Scheduler: 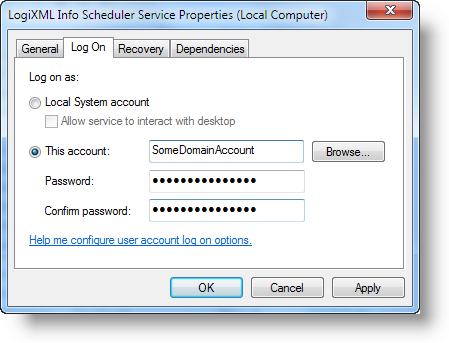 In the Services administrative tool, double-click the LogiXML Scheduler Service to view its properties, as shown above, then select the Log On tab. Check This account: and provide valid domain account information and click OK. Then stop and restart the Scheduler service.

The Logi Info Scheduler Service for Java runs on the Linux/UNIX or Windows operating systems. It's distributed as part of the Logi Info product and, regardless of the server type that you plan to run it on in the end, in order to access its files it must first be installed on a Windows machine, using the Windows product installer, as shown in the previous section. Naturally, during the process you select the Scheduler Service for Java feature option, not the service for .NET.

The default installation location is: C:\Program Files\LogiXML IES Dev\LogiXML Scheduler Service Java. In the rest of this topic, the installation folder you specified, the default or a custom location, will be abbreviated as <installFolder>.

On a Windows Server

By default, the Scheduler Service for Java, installed on a Windows server, isn't configured to start automatically. Instead, it's started by running:

When running the Scheduler Service for Java on Windows 7 or Windows Vista, the User Account Control (UAC) system can interfere with normal operations of the Scheduler, as the <installFolder>\Log, \RunNowTasks and \Schedules folders require Write file access permissions. There are two options to resolve this: either disable UAC on the server, or use UAC to set the privileges of these directories to allow Write access. This MSDN article provides more information about UAC should you need it.

If you wish to start the Scheduler service automatically, and you feel comfortable directly modifying system-level configurations, use the Registry editor to add a String value in

Set its Value Name to LogiSchedulerJava and its Value Data to <installFolder>\bin\Scheduler.bat.

On a Linux/UNIX Server

The Scheduler is started by running <installFolder>/bin/Scheduler.sh. Don't use a symbolic link for this, as it may lead to unstable behavior.

To start the Java scheduler automatically, add a line to /etc/rc.d/rc.local. The invocation should be similar to

Note that the ampersand (&) at the end is significant: it causes the application to load as a background process.

Due to the flexible nature of the Scheduler and its interactions with Logi Info applications, you can install the Scheduler on a different server than the application web server, separate from Logi Info, if desired.

However, both of these attributes can be changed by (1) setting the appropriate attribute values in your Logi Info application's _Settings definition, and (2) editing the text file named _Settings.lgx in the Scheduler's <installFolder>. For more information about this procedure and the Scheduler in general, see Use Logi Scheduler.

In v11, the option of storing the data instead in a networked Microsoft SQL Server, Oracle, or MySQL database was introduced. In order to use one of these SQL database servers, you must first create the Tasks table in a database of your choice, and then configure the Scheduler's _Settings.lgx file appropriately, as described in Use Logi Scheduler. Example SQL scripts for creating the Tasks table on each of the supported database servers are installed with the Scheduler in its <installFolder> for your use.

A multi-instance configuration is not supported when using the standard embedded VistaDB (.NET) or Derby (Java) databases.

For the purposes of interacting with multiple Scheduler service instances from a Logi application, the application's _Settings definition must be properly configured to address all of the instances. This is discussed in Use Logi Scheduler.

Developers or administrators who just want to run Logi applications on a scheduled basis can do so by: