Logi XOLAP (pronounced "zo lap") is a new technology that brings the analytical power of data cubes to your relational data and other diverse data sources such as web services, XML, and files. This topic presents basic Logi XOLAP concepts.

This new, highly flexible model for bringing easy analysis to users can be very complimentary to traditional OLAP analysis. XML and web-server powered, it's very consistent with the extensible and flexible approach at the heart of all of Logi's tools.

A data cube is a collection of data that allows analysis in multiple "dimensions." 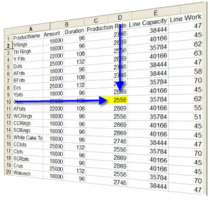 Consider, for example, a spreadsheet. This is a classic arrangement of data in two dimensions: rows and columns.

The intersection of a row and column provides us with a specific data value. We can also use all of the column values along a single row or down a single column for comparison or summarization purposes. 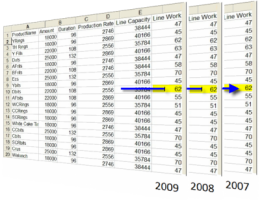 Now, let's consider what happens when we "stack" several identically-formatted spreadsheets, one behind the other. If we pick a specific cell in the front sheet and "drill through" it, we can examine and compare the values for that one cell on all of the sheets. This is a "three-dimensional" comparison, and an example of how data can be arranged into a "cube." The drill-through provides a third dimension.

OLAP data cubes are usually marvels of data warehouse engineering, and designing and implementing them is a time-consuming, complicated process. Specialized database servers are often employed. Queries made against an OLAP cube use a special query syntax (MDX) that's similar, but notably different, from that of standard SQL queries.

Logi Info includes OLAP elements that can issue these queries against OLAP cubes and the results can be viewed, aggregated, summarized, and charted. Logi Info, however, does not create OLAP cubes.

Working from the premise that there can be useful multi-dimensional analysis of data that's not necessarily in an OLAP cube, Logi Info includes the ability to create similar data structures on the fly and report on them. At run time, a Logi Info report can query a wide variety of data sources and build a temporary, XML-based virtual data cube from the results.

Specialized Logi Info elements allow analysis of, and reporting on, these XML cubes. Logi XML Online Analytical Processing, or Logi XOLAP, delivers much of the analytical power of data cubes without the overhead associated with building large OLAP systems.

Naturally, there are some limits. While Logi XOLAP is similar to OLAP in its analytical methods, it doesn't necessarily support the same scale.

OLAP cubes usually include vast amounts of often historical data and are designed with a range of queries in mind, so that specific and ad hoc queries can be handled. They are relatively permanent structures and are often only dynamic in that new data is constantly added to them. Essentially, an OLAP cube is designed and built long before the first query against it is issued.

Logi XOLAP, on the other hand, builds a virtual data cube on demand in response to specific query from an individual user. Therefore, queries that involve millions of result rows may result in unacceptably slow performance. As with all attempts to quantify database limits, a number of factors such as the number of columns, data types, and the number of concurrent queries make it difficult to provide a specific row limit. Logi XOLAP is generally optimized for 10's to 100's of thousands of records, and with the benefit of the Logi Info Hybrid Engine, it can also scale based on hardware such as RAM and CPU/Processing power. For more information, see The Logi Server Engine.

Logi XOLAP performance is monitored in the Logi Info debugger page, so you can see how long it takes to process your data.

For example, the debugger entry above shows the time it took (just over 1/10 of a second) to read and process a Logi XOLAP data cube using a 10,000+ record data set on a non-server class PC. This can be extrapolated, given the exact same data, cube dimensions and measures, and query load, to 5.5 million+ rows a minute. We can't guarantee a specific performance level but this example is instructive.

The ability to create virtual cubes of XML data, even from data sources not normally associated with OLAP, and report on them is a fantastic capability that allows new opportunities for data analysis.

The new Dimension Grid super-element is the user interface for working with Logi XOLAP cubes: 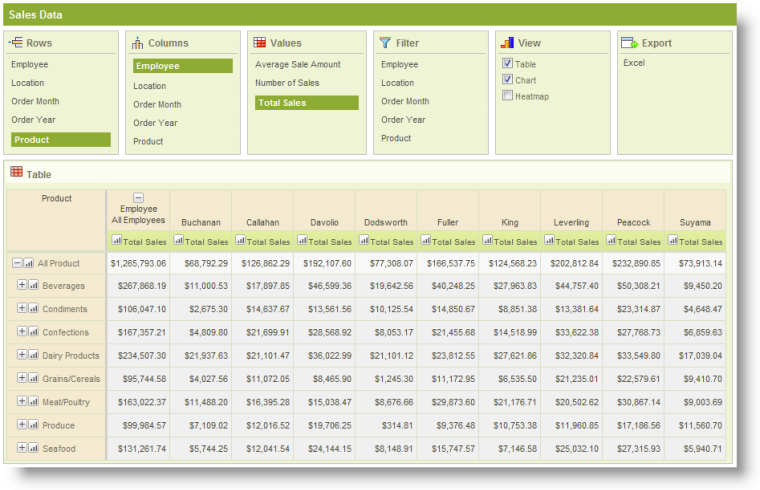 As shown above, the Dimension Grid consists of panels across the top and the data table. Charts and a heatmap can be displayed beneath the table. The user can dynamically change the contents of the data table or charts at runtime using the controls in the panels (subject to the way the report developer has configured the grid). So users, through their browsers, can slice and dice and drill into the XOLAP data at runtime to perform the analyses they need.

The appearance and functionality of the grid can also be customized on a per-user basis and the changes users make at runtime can be saved between sessions and restored for their next session.

The Dimension Grid and the Xolap-family of elements that support it are described in detail in Work with Logi XOLAP.

As of v10.0.117, the XOLAP Cube and its child elements can be used with the OLAP Grid and OLAP Table elements. This provides alternate datasources for the OLAP elements and the ability to use the more flexible OLAP Grid with that data.

The Dimension Grid, however, only displays data contained in Logi XOLAP cubes; it's not able to connect to a OLAP cube, nor do we offer a mechanism for building a XOLAP cube by querying an OLAP cube. Therefore, you must use the OLAP Grid element, not a Dimension Grid, to display OLAP data.