Logi managed reporting products include features, collectively called Logi Security, for securely controlling access to reports and data. This topic provides an overview of the principles behind Logi Security and its implementation.

"Logi Security 10" refers to a modified set of security elements released with v10.0.189 that make security easier to implement.

Logi Security presents a flexible mechanism for configuring user authorization that allows integration of report security features in almost any environment. It allows developers to take advantage of the user and role/group infrastructure built into the Microsoft Windows operating systems, including NT Security and Active Directory domain security. Alternatively, Logi Security also works with custom security schemes that store information in a proprietary datasource. Hybrid systems, using elements of both, can also be used.

The Logi Security implementation utilizes the traditional concepts of authentication and authorization, which are discussed in detail in the following sections. Rights can be assigned to users, and elements, queries, and actions in a Logi application can be restricted to users with certain rights. A further abstraction, matching a user to a list of roles (or "groups"), which are also associated with rights, is also available.

Different levels of security are available in the two Logi managed reporting products, as shown in this table:

In the Windows versions of our products, special security elements are provided that interact directly with the Windows operating system; these are not available in our Java versions.

Companies that implement central authentication servers using protocols such as TACACS+ and RADIUS will have no difficulty using Logi applications. These protocols, used along with network access servers, generally serve as gatekeepers for access to networks and servers at the communications level. Once access has been granted, traffic and content from the web servers used to distribute Logi reports operate normally.

In general, security servers that maintain centralized security credentials for users may be accessible as a direct source of credentials for Logi applications. As discussed earlier in the publication, Logi security can work with customized SQL databases that contain security data.

However, the availability of access to these databases, encryption schemes used on the stored data, and other factors make it impossible to state here with certainty that Logi security can access the required data.

Secure Sockets Layer (SSL) is a cryptographic protocol that provides security and data integrity for communications over networks such as the Internet. SSL encrypts the segments of network connections at the Transport layer end-to-end.

The Lightweight Directory Access Protocol (LDAP), is an application protocol for querying and editing hierarchical sets of records over a network, and is commonly used to store user and group security information. Microsoft's Active Directory, Oracle's OpenDS, and Novell's eDirectory are all examples of LDAP implementations.

In a typical .NET application, credentials entered via a login page are compared against an LDAP server to authenticate the user and retrieve role information. Beginning with v10.0.366, Logi Info includes specialized LDAP elements for this purpose, for use with both .NET and Java applications. For Java applications built with earlier product versions, a custom logon JSP page has to be created that interacts with the LDAP server and then uses Logi SecureKey technology to pass user information into the Logi application.

As of v10.0.240, Logi Security is compatible with Federal Information Processing Standards (FIPS) security. Specifically, it will work correctly when a user's local or global security policy has its System Cryptography setting configured to "Use FIPS compliant algorithms for encryption, hashing, and signing".

Authentication - Who is the User?

Authentication is the process of identifying the current user - the "login" or "logon" process that typically associates a user record with a password. For Logi applications, this can be accomplished either by relying on operating system security features, by building a custom Logi-based authentication system, or by letting another application handle it.

Once a user is authenticated, then Logi Security has an internal username that uniquely identifies the current user and drives the authorization process discussed later.

When using operating system-based authentication with Windows, Internet Information Services (IIS) manages who can enter a Logi web application. IIS determines the user's identity and that identity gets passed into the Logi application.

IIS has a number of authentication options, configurable in the IIS Manager utility, shown above. Microsoft provides more detailed instructions for using IIS security, but generally you turn off Anonymous access and enable Integrated Windows authentication, which validates the user with an account established either on the web server or elsewhere in the network domain. When necessary, the browser displays a login dialog box.

Operating System authentication is more commonly used in intranet/extranet situations where web or domain administrators can easily maintain the list of valid users.

Custom authentication may also work best when operating system accounts cannot be easily managed, such as when using an out-sourced web hosting provider.

Authorization - What is the User Allowed to Do?

Authorization determines what an authenticated user is allowed to view and what actions they can perform. Logi managed reporting products do this using Rights and, optionally, user Roles (also known as "Groups").

Many of the elements used to create Logi applications are "security-aware". They have a Security Right-related attribute that restricts users who have not been granted the proper right from seeing or using them.

In the case where a user is directly assigned rights, he is given permission to view reports and data, and perform actions, providing one of his rights matches the rights assigned to appropriate elements.

When roles are used, a user is assigned to one or more roles, such as "Executive" or "SalesStaff", and each role is assigned certain rights, which then provides permission to view reports and data, and perform actions by matches the rights assigned to appropriate elements.

For example, users assigned the Executive role may be permitted to see all information and view all reports, but users assigned the SalesStaff role get access to fewer reports and/or less information. A right might be descriptively named "ViewEmployeeData" or "ViewSalesReport" and provide permission to view the related reports. Then the Executive role may be given access to both rights, whereas the SalesStaff role may only get access to the second one.

How are roles, rights, and functions defined for Logi reporting products? Rights and roles can come to a Logi application from the operating system, from querying a datasource, or they can be passed in from an external application if they're a by-product of the authentication process.

Relationships between roles and rights are controlled by the developer in the Logi application's _Settings definition in the Security element and its child elements.

The following scenario is offered to help you understand roles and rights.

Assume that a business has four users of the Logi reporting system and each has been assigned one or more roles appropriate to their responsibilities:

Now actual reports can be mapped to the rights:

Based on the roles and rights matrix created by the above information, the following table shows what reports are available to which users:

Dave, the data entry clerk, is only assigned the DataClerks role, which does not give him access to any reports.

Adding Security to a Logi Application

This section briefly describes the major elements that are used in a common implementation of Logi application security. A companion topic, Work with Logi Security 10, provides more detailed information for developers, and another one, Security Scenarios, offers step-by-step guidance for implementing security in different circumstances. 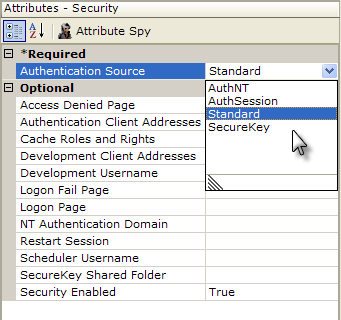 Security is enabled and globally-configured in the _Settings definition. As shown above, the Security element, which becomes the parent of all other security-related elements, has a number of important configuration attributes. These include the Authentication Source selection and Security Enabled which enables or disables security altogether.

If rights haven't been determined automatically under AuthNT or SecureKey, they need to be enumerated using a User Rights elements as a container and then one or more of the three rights retrieval elements. Rights From Roles builds the list of rights directly from the User Roles values (the roles and rights are the same); Rights From Datalayer retrieves the rights from a datasource using a datalayer; and Right From Role, shown above, defines individual rights and uses a datalayer to retrieve roles associated with each right.

Finally, as shown above, in order to restrict access to a report or specific element, a Security Right ID-type attribute value is set to the ID of a right that's already been defined.

When the report is generated, elements that have rights specified like this cause a "behind-the-scenes" comparison to occur: does one of the rights associated with the specified element match one of the rights assigned to the current user? The comparison takes place using the cached rights information described earlier. If there is a match, the element (or in the example above, the entire report) is generated by the server engine; otherwise, it's not. An "access denied" page is returned in lieu of a report page when a user is not authorized to view a report.

Report-, element-, and record-level security, and three different authentication schemes, are demonstrated in the Securitysample applications available on DevNet, in the Sample Applications area.

For more information about security, see the next topic in this series, Work with Logi Security 10.