As mentioned above, a Google Map is an interactive geographic map that can be use your data to identify locations and provide other features. The concept is simple: take two different data sources (your data and Google's maps) and combine them into something that's more useful than the sum of their parts.

The example above shows a Google Map of the area surrounding Washington, D.C. It's a typical map depicting roads, major land features, and significant points-of-interest. The example also identifies the available optional controls, the scale for indicating map distances, and the cursor shaped that appears when dragging the map within its viewing area. 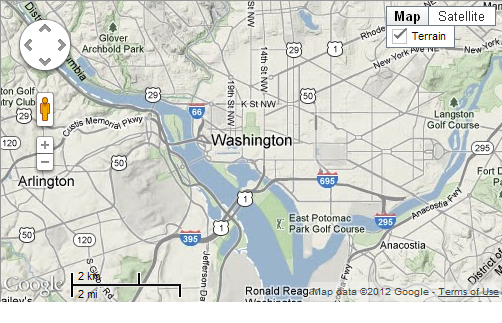 The example above shows the same map with the Terrain map type selected. 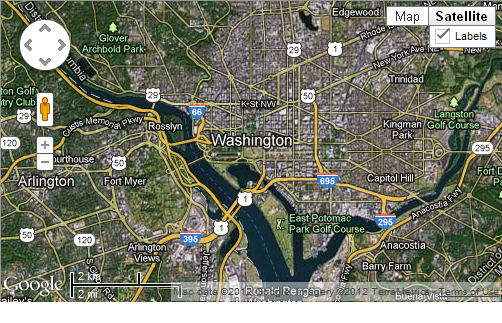 This basic example shows the same map with the Satellite map type selected. 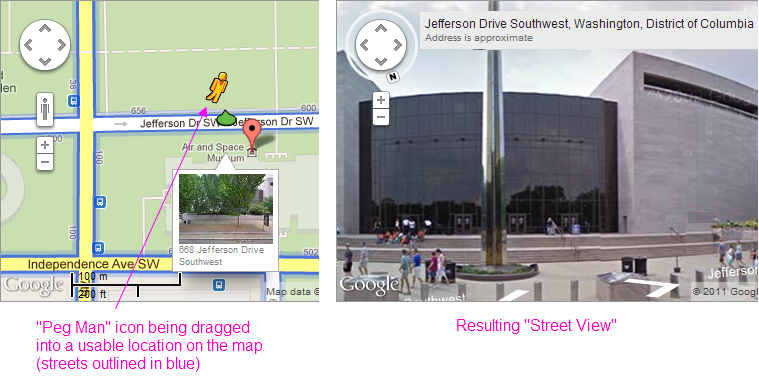 In "Street View" mode, Google Maps provide a street-level photographic view of a map area. Street View is engaged by dragging the "Peg Man" icon, as shown above, onto an enabled street (shown in blue when the icon is moved). Once dropped, the view switches to street-level and controls are presented allowing you to navigate and turn within the "virtual world".

Now the basic map example includes a "mashup" of data. When identifying data is fed to the web service, the resulting output can pinpoint locations on the map. The example above shows how a geographic Map Marker is placed on the map to identify a specific location. Map Markers can use the default icon (shown) or a custom image, gauge, or even a chart. Optionally, the map can be configured to display a Map MarkerInfo window, containing additional location-specific data, when the marker is clicked. 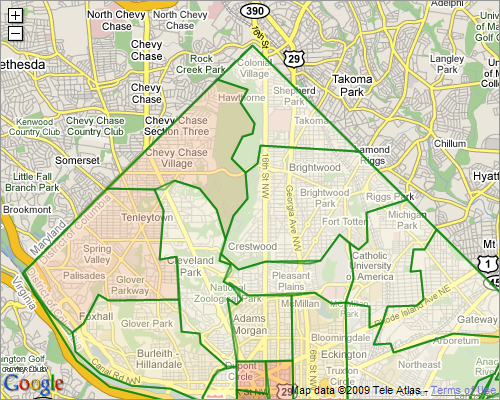 The example shown above includes data-driven, colored regions (in this case, representing postal codes) overlaid a map of Washington, DC. Logi Info can work with GIS boundary data to produce region overlays for states, counties, cities, school districts, and other areas. Like the Map Marker, regions can be clicked to display a pop-up information window with detail data.

Check out these interesting examples of Google Map mashups from around the world.

The formal definition of a web service is "a software system designed to support interoperable, machine-to-machine interaction over a network". In plain terms, developers can think of a web service as a standard programming "function" that happens to be hosted on an external machine, one that your Logi app reaches over the Internet. You send it parameters and the web service sends you results, with the benefit that the whole process is language neutral. 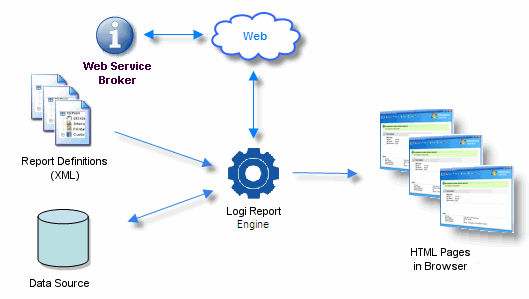 The diagram above illustrates how this fits into the Logi application architecture. Usually, the "parameters" that you send to the web service come from a database that your application queries. The results are used in the HTML pages that are output to a browser. Logi Studio elements make the process of connecting to, and communicating with, the web service very easy.

API Licensing and Use

Web service brokers, such as Google, make their web services available to Internet users, often for a fee. This means consumers of the services are obliged to sign up and pay, usually on a transaction-by-transaction basis.

We're making the following license-related information and links available as a courtesy but, as Google's licensing plans may change without any notice to us, please understand that we don't guarantee that the information to be currently accurate. You, as the developer, are responsible for reviewing the current Google licensing requirements and for taking whatever actions are legally necessary with regard to licensing.

Google Maps licensing can be reviewed in this license comparison page. In general:

Use this link to review the Google Maps Terms of Use.

The Logi Studio Google Map element requires a Logi Info license; it's not available in Logi Report. In addition, when your finished application runs, it needs to be able to access the Internet in order to interact with the Google web service, which means there may be firewall and security implications for you to consider.

Note that Google Maps maps can only be used within HTML, so they cannot be exported to other formats such as PDF or Word.

The Google Map Family of Elements

A number of Logi Studio elements make up the family used to create Google Maps. Each element, its function, and its attributes are discussed below:

Developers may want to refresh their Google Maps with new data, either automatically or in response to user input. To do this, you can, of course, use an Action.Report element to refresh the entire report page.

A Google Map element is not usable as a direct target of an Action.Refresh Element or Refresh Element Timer element; not even if you wrap the map in a Division.

Data used for Google Maps typically contains, at the least, address information. When this information is sent to the web service, the map generated will be scaled to fit the data into the dimensions you set for the map (in the Google Map element). 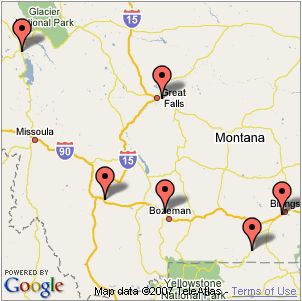 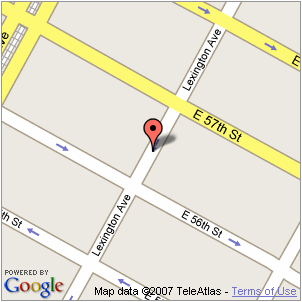 For example, if your data only includes state/province information for a single state, the map generated will be scaled to show as much of the state as necessary to include all of the map markers (above, left). This could be the result, for example, of a SQL query statement that includes a WHERE State = 'MT' clause.

However, if your data includes street address, city, and state/province information, the map generated will be scaled as a street-level map (above, right). This could be the result, for example, of a SQL query statement that includes a WHERE City = 'New York' clause. 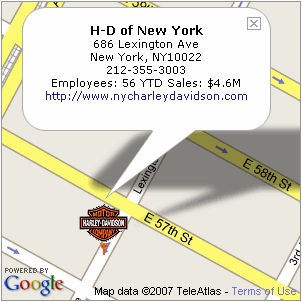 As shown above, one of the benefits of the interactive nature of these maps is that you can display additional information when the map marker is clicked. So, your data might include business intelligence data in addition to the address information. For example, revenue figures or employee counts. This data can be displayed, as in the example, in the Info Window that pops up when a marker is clicked. The Info Window can also contain images, charts, gauges, sub-reports, and links, all driven by data.

If your data already includes latitude and longitude positioning data, so much the better. The use of Geocode Column elements to provide that data involves additional "trips" to the web service and, depending on the service broker's agreement, that could mean additional transaction fees. In addition, at the time of this writing, Google imposes a geocoding limit of 2,500/day (using free service) or 100,000 day limit (Premiere API license) or enterprise users may have other contractual limits.. See the Google Maps Geocoding Usage Limits for more information.

Support for data that includes "MultiGeometry" tags is included.

This concludes this introduction to Google Maps. For additional information, please see our Google Map Tutorial.