Sharing with Groups of Users

Sharing bookmarks with groups of users works in a manner similar to the sharing mechanism we've already seen, with two important implementation differences. First, the security configuration must, of course, identify groups and the users that belong to them.

The example above shows a simple arrangement of security elements that uses a static datalayer to illustrate the assignment of roles, or "group membership", to users. It's through these elements, whether static or from other sources such as Active Directory, that a user is understood to "belong" to a group. We can see above that user "Roger" belongs to the group "Operations".

The second difference is that a Sharing List must be used and its configuration needs to include entries for groups, as shown above.

These group names should match those in the security elements in the _Settings definition.

Your should include a column as a "this user name is really a group name" flag. When this column value is blank, the username column will be understood to be the name of an individual user; when the column has any other value, such as "yes", the username column will be understood to be a group name. The name of the group name flag column is entered into the Sharing List element's Group Identifier Column attribute. In the example above, that would be "isGroup". 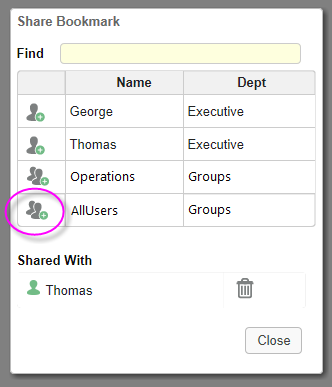 With groups included in the Sharing List configuration, the sharing pop-up will look like the example shown above, with special icons for groups.

As you might expect, when you share a bookmark with a group, it will be available to all of the users in that group.