One of the most useful features in Logi Studio is the token completion feature. It's often difficult to remember all of the token types and identifiers that are available and this feature presents them and also prevents typing errors.

Here's how this feature works:

Similarly, you can use the intelligent completion feature to provide column names, for example, for @Data tokens: 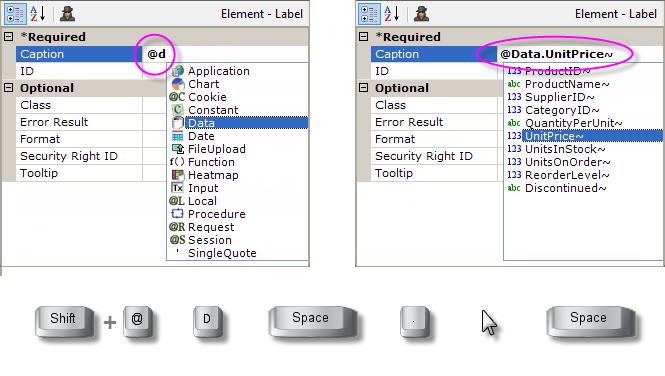 The token completion feature also appears in other places, too:

For example, when you use the Attribute Zoom window and enter tokens, as shown above. Also, in the SQL Query Builder, if you edit your query manually and use tokens, it will pop up. The Space Bar and Period keystrokes work in these instances in the same way as described earlier.

Studio includes a token validation feature which examines tokens as you enter them and flags those that are incorrectly spelled.

In the example shown above, the tilde ("~") has been left off of the end of the Data token. Studio responds by displaying an Invalid Token button in the current definition tab. Clicking the button will take you to the offending token. The validation routine looks for missing tildes and misspelled token types ("@Reqest" instead of "@Request", for example).