This topic discusses use of the Responsive Design elements, which provide a dynamic layout and visibility mechanism for Logi reports on a variety of devices.

Responsive web design has the goal of creating pages that provide an optimal viewing experience, including easy reading and navigation with a minimum of resizing, panning, and scrolling, across a wide range of devices (from mobile phones to desktop computer monitors).

In a Logi application, this is accomplished using Responsive Design elements, introduced in v11.4.046. They dynamically adapt the report layout to the viewing environment by using fluid, proportion-based grids and controlled visibility. When these elements are used, viewport sizes are automatically determined using CSS3 media queries and are standardized in Logi apps as the following:

Use Responsive Rows and Columns

Logi applications have long had Rows, Row, and Column Cell elements available for construction of an HTML table object as a container for content. The Response Row and Responsive Column elements provide similar functionality but also dynamically resize to accommodate viewport sizes.

The Responsive Row element adds a "fluid grid" to the report page, as shown above, which fills 100% of the width of its parent element. The grid consists of 12 columns. This is similar to grids found in the Bootstrap and Foundation frameworks.

Normally these two elements are transparent, without borders or background color, though they can be styled. 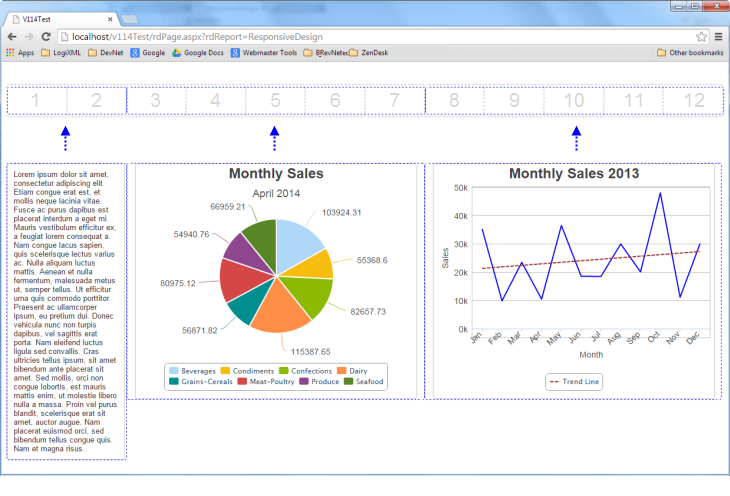 In the example above, we see how content fits into the Responsive Column elements and how they span the grid in a Large Screen viewport. 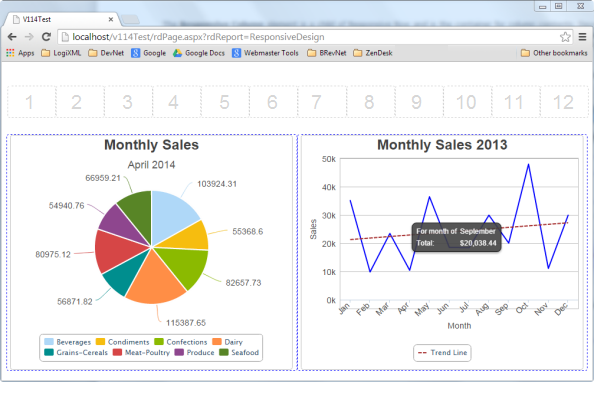 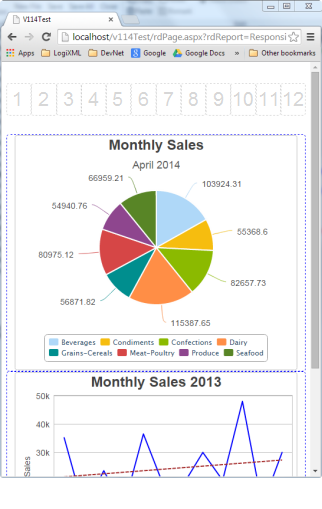 And, finally, as the viewports gets even smaller, the Responsive Column elements can be configured to span all the Responsive Row grid columns, as shown above, producing a "stacked" appearance.

Here's an example showing how the elements discussed above are used:

The Responsive Row element can be the child of a variety of other elements. In the example above, it's been added directly beneath the Body element. It has no required attributes.

However, take note its Collision Behavior attribute. Responsive Row content works best when it dynamically shrinks and grows to fit the column width. Normally, report developers should give Responsive Column elements enough width so that the content fits. But there are times when, as the viewport gets smaller, content just can't shrink enough to fit. For example, a data table can only become so small or an image may have a fixed width. The Collision Behavior attribute specifies what to do when Responsive Columns "collide" in different viewport sizes because their contents can't shrink appropriately. Attribute value options include

Next, you need to add one or more Responsive Column elements to the definition. It has no required attributes.

If more than 12 Responsive Column elements are used, they'll be wrapped into another row below the first 12 elements when displayed.

Another Responsive Column element example is shown above. Its Colspan attributes are set to produce the behavior seen in the examples at the beginning of this section.

The Responsive Visibility element can be the child of a variety of other elements and, as its name implies, it controls their visibility. Developers can use its attributes to specify which viewport sizes cause the parent element to be hidden from view. 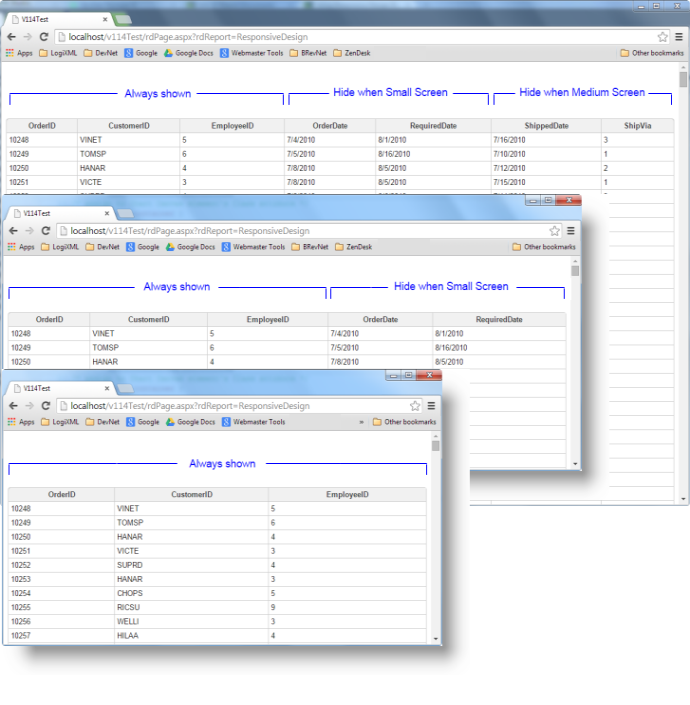 In the example above, Data Table Columns elements have been given child Responsive Visibility elements and, as the browser window gets progressively smaller, additional data table columns are hidden.

Here's an example showing how the element discussed above is used:

In the example shown above, a Responsive Visibility element has been added as a child of a Data Layer Column element. Its attributes are set as shown. The column will not be displayed for Small Screen size viewports. 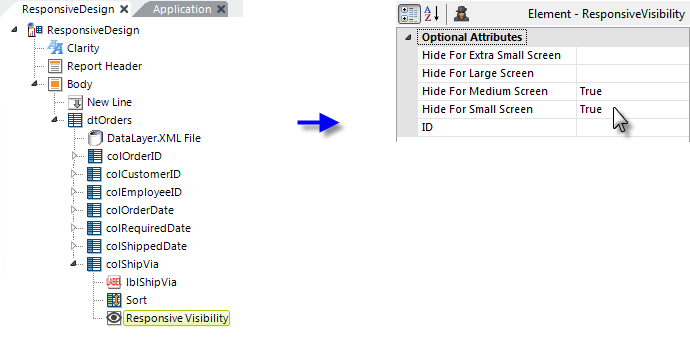 Now we've added more data table columns and another Responsive Visibility element. Note that if you decide to hide an element at a larger viewport size, you will most likely also want to hide it at smaller sizes, otherwise it will disappear then reappear for progressively smaller viewports.