Logi Studio provides two methods for positioning elements on the report page: Flow positioning and Absolute positioning. This topic introduces developers to the use of these positioning schemes.

Do not switch layout modes, even just as an experiment, without reading the section Switching Back from Absolute to Flow first. Absolute positioning is retained in Logi Analytics products primarily for backward compatibility with earlier versions and we highly recommend that you do not use it for any new development work.

About Flow and Absolute Positioning

Logi application report definitions are developed in Studio using the Element Tree, which is a hierarchical arrangement of elements. Flow positioning determines the layout of the elements on the report page by order of appearance and each element's position is based on the previous element's position. 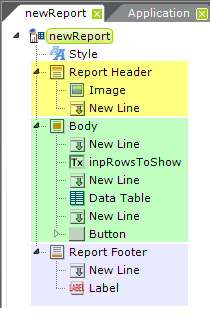 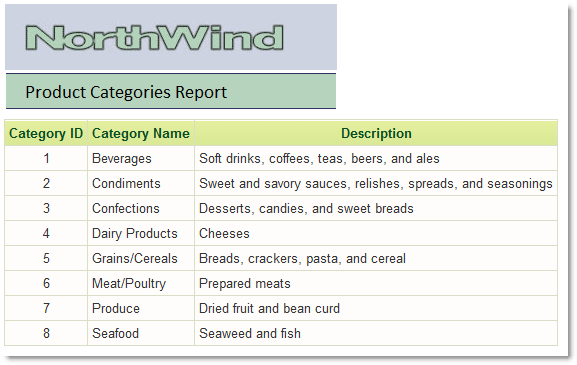 Flow positioning is the default layout for report definitions in Studio and works well with multiple browser types and mobile devices. The use of HTML tables (Row, Rows, and Column Cell elements in Logi definitions) and the careful application of style classes can achieve very accurate alignment of elements on the report page under Flow positioning and, for most situations, it's the best approach.

Absolute positioning, however, determines the location of the elements on the report page by assigning groups of elements exact pixel offsets from the top and left side of the browser window.

When Absolute positioning is in use, Studio's Layout editor enables developers to place elements in absolute positions on the screen by dragging and dropping them (it's not completely WYSIWYG but it's close).

The example above shows the previous report after Absolute positioning has been enabled and elements have been positioned as desired.

While Flow positioning is the default, the positioning scheme can be selected on a report-by-report basis.

The positioning scheme is controlled, as shown above, by selecting the Report (top) element in a definition and selecting the desired scheme in its Element Positioning attribute value. A blank entry selects the default scheme, Flow positioning.

Two things happen when Absolute positioning is selected. First, all elements that can contain other elements (Division, Body, Row, etc.) are given two "hidden" attributes: absoluteTop, and absoluteLeft. These attributes do not appear in the Attribute panel but are managed behind-the-scenes by Studio. The element will also have Height and Width attributes which may or may not be visible depending on the nature of the element. These attributes allow the Logi Server engine to accurately place elements on the page when a report is being generated. 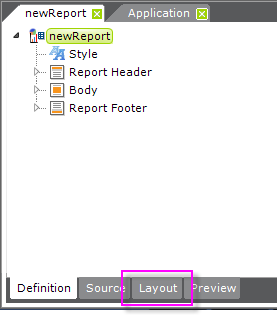 The second thing that happens is that the bottom of the Workspace panel acquires a new tab, the Layout tab, as shown above. Clicking this tab opens the Layout editor.

Switch Back from Absolute to Flow

Use the Layout Editor 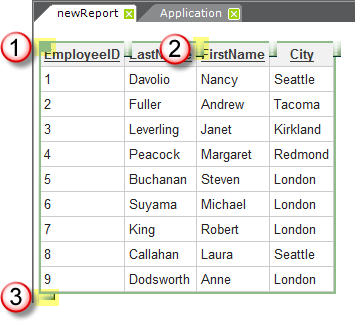 Selecting certain types of objects in the layout encloses that object in a green outline, as shown above, with one or more "grab points". The table object shown above provides three types of grab points: 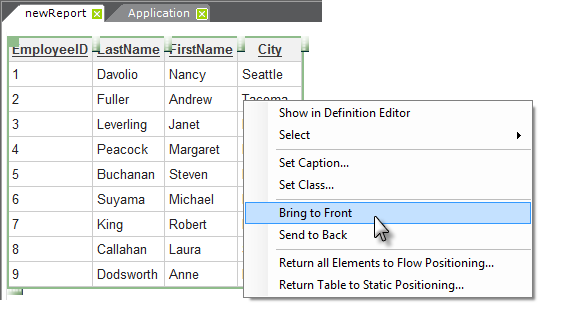 A selected object can be right-clicked to view its context menu, as shown above. Options here allow the following operations:

Menu options are dynamic and will change depending on the nature of the selected element.

Absolute positioning provides a method of allowing one object to overlay another. Overlay gives developers the ability, for example, to create a foreground and a background for report definitions. 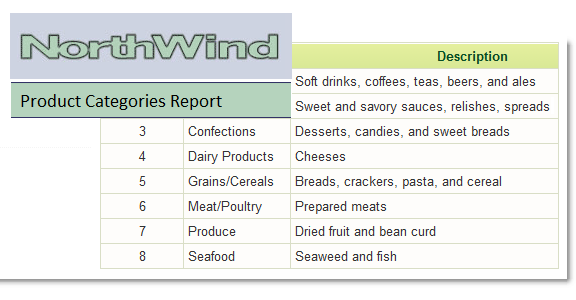 The same results can be achieved with Flow positioning by using the CSS position: absolute property and value combination.