Logi Info's Animated Maps are animated, interactive, data-driven, Flash-based maps for Logi applications. Developers can use them to display geographical data distributed by category, regions, or entities. The best usage examples include statistical display of data, flight routes, office locations, election results, survey results, or business intelligence such as "Revenue by Regions" or "Revenue by States". They do not work with zip codes or geocoded (latitude- & longitude-based) data.

Like all Logi data visualizations, map portions can be interactive links that can be clicked in order to "drill-down" to other reports, charts, and URLs.

These maps are based on Adobe's Flash technology and require that the free Flash Player browser-extension be installed in order for them to be viewed by consumers. Maps for 186 countries and regions are included with Logi Info; see the list of available maps below.

In almost all of these maps, their subdivisions (regions, provinces, states, etc.) are referenced by a internal numeric ID. In order to relate these ID numbers to "real world" names more likely to be encountered in your data, such as "Montana" or "Belgium", each map has a companion XML data file that can be used to cross-reference a region name to the internal ID. This is discussed in detail later in the Referencing Data section.

Animated Maps are included in Logi Info applications by adding the Animated Map element to a report definition.

In the example above, an Animated Map element has been added and its attributes set as shown.

The resulting map is shown above. When the cursor passes over a state, its color changes and a "tooltip" appears with the full state name. The attributes for the Animated Map element are explained below. Unless otherwise noted, attribute values are optional.

It's nice to be able to show maps, but the Animated Map element becomes really useful when it associates data with map regions. To do this, a datalayer element is added to the definition.

In the following example, a map of Canada will be produced, showing its provinces with their abbreviations. When the cursor passes over a province, a "tooltip" will appear showing the full province name and the number of members in a mythical book club chapter from that province.

In the example definition above, a DataLayer.Static element has been added as a child of the Animated Map element, and some Static Data Row elements have been added to provide data values. Naturally, depending on the datasource, other types of datalayers can be used here.

A fragment of this map's companion XML data file, Canada.xml, is shown above. Note its highlighted attributes, "InternalID" and "LongName". In order to relate the Province value in our data to the appropriate region in the map, a datalayer Join can be used between the data and the companion XML file.

Next, a Join element is added, as shown above. The Join element performs the equivalent of a SQL JOIN on two datalayers. In this case, an Inner Join will used between the static datalayer and...

...a new DataLayer.XML File element which is added. This datalayer retrieves the data from the map's companion XML file and its XML File attribute value is shown but has been truncated to fit on this page. The real value should always begin with:

Finally, a Match Condition element is used to provide the JOIN criteria: the Province column value in the static datalayer must match the LongName column value in the companion XML file. Note that, as in any JOIN, the choice of which column is on the left and which is on the right is significant. Generally, the Left Data Column comes from the datalayer above the join and the Right Data Column from the datalayer below it.

Now when the map is displayed, as shown above, and the cursor is placed over a region, the LongName and MemberCount information appear in a tooltip.

"Drill-down" capability can be added by placing an Action element, as shown above, beneath the Animated Map element. Region-specific data can be accessed using @Chart tokens and passed, as Link Parameters, to the next report or process.

Once data values have been associated with them, individual regions in an Animated Map can be color-coded based on those values.

This is accomplished, as shown above, by adding one or more Map Color Range elements beneath the Animated Map element. Each element represents one color, which is set in its Color attribute. A legend is automatically generated for the map and the text in the DisplayValue attribute is used in it. The assignment of a color to a particular map region is controlled by the Max Value and Min Value attributes; the color will be assigned if the data value is within this range. These values correspond to the data value identified in the Animated Map element's Region Value Column attribute.

will accurately handle a data value of 10.5 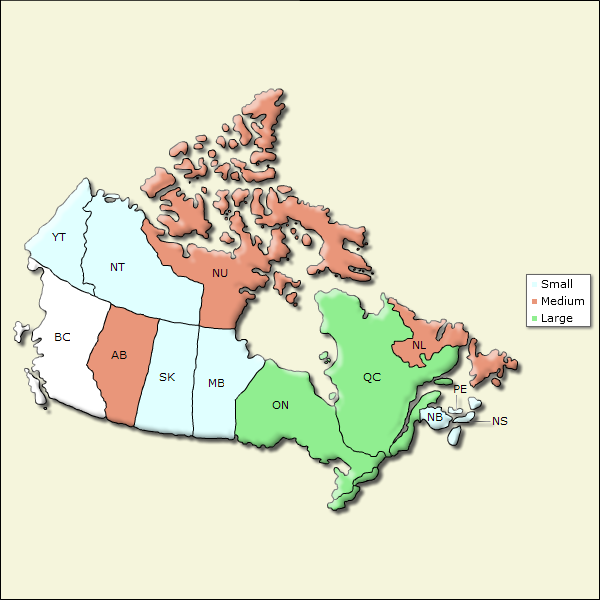 And the results can be seen in the example shown above. If no text is entered in the Display Value attributes, the numeric minimum and maximum values will be displayed in the legend instead.

Use a Color Spectrum Legend

Instead of using Map Color Range elements, you can add a "color spectrum" legend to your animated map; this legend uses colors to illustrate the distribution of the data values used to generate the map and assigns those colors to the appropriate map regions.

Only one Color Spectrum Legend may be used per report definition (including its sub-reports), so this is not a viable option if you plan to show animated maps in, for example, tabs or dashboards. This limitation will likely be removed in future product releases, at which time this topic will be updated. 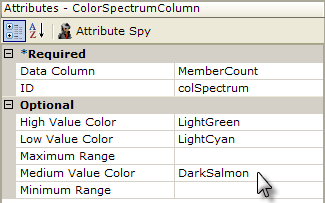 The first step, as shown above, is to add a Color Spectrum Column element beneath the datalayer. Configure its attributes to identify the data column used as the Animated Map element's Region Value Column, and the desired colors for the low, medium, and high values. 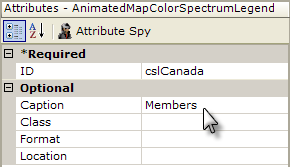 The next step is to add an Animated Map Color Spectrum Legend element, as shown above, beneath the Animated Map and to set its caption. The legend appears by default below the map, but its Location attribute can be set to make it appear to the right of the map. 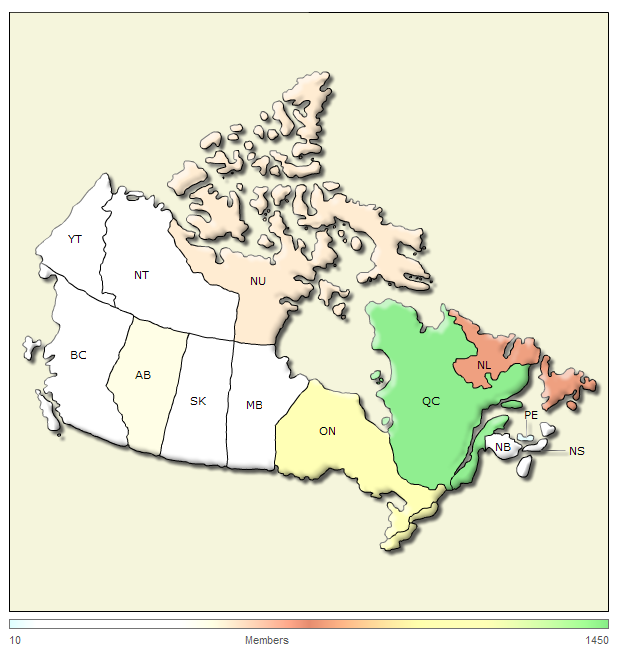 And the resulting map and legend are shown above.

The following maps are provided with Logi Info:

A sample application can be found in the DevNet Sample Applications page.