This topic is to help developers customize column headers, add interactive sorting capabilities, and create various types of aggregations based on column data.

The Data Table Column element has the following attributes:

A column header contains optional information at the top of a specific data table column. Generally, column headers consist of text but, in a Logi application, they can include images and even user input controls, like buttons and links. Text or images may be a link that, when clicked, sorts the table on the column in alternating ascending and descending order.

The Column Header row is the first row in the table, as shown above.

To configure a column header: 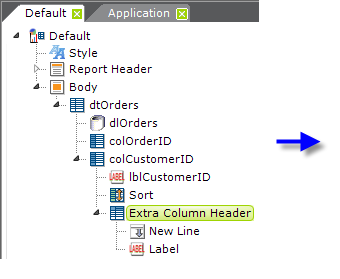 In the example above, an Extra Column Header element has been added as a child of a Data Table Column. It contains New Line and Label elements and the effect is to make a 2-line column header for the Customer ID column, as shown.

An attribute was added to the Data Table Column element, Column Header Class, which allows you to justify the header text.

In earlier versions, to justify the header text, you must create a CSS class that targets the Data Table Column element based on its ID attribute, plus "-TH". This type of style class specification uses the # sign rather than a period before its name, as it affects elements with a matching ID, you don't have to assign it to the element's Class attribute.

Depending on browser versions, you may or may not need to use all three of the text-align descriptors in the class specification, and in the order, shown above to cover all of the major browsers. In the Data Table Column element's Class attribute, you'll still have to assign an appropriate class, your own or from a Theme, to justify the actual data.

You'll need to create one of these class specifications for each column header that you want to left- or right-justify.

Note that the effectiveness of other style descriptors in these style classes, such as font-size or -weight, may vary depending on any other style settings that have been made for the table, its rows, and cells, including those set by Themes.

Developers often need to present data tables with their data sorted in a specific order and this can be done by sorting the datalayer data. You can also give users the ability to dynamically sort columns at runtime simply by adding a child Sort element beneath any Data Table Column element. This causes the column header text to become a link that users can click to sort the table based on that column.

Column data is sorted in the order specified in the First Sort Sequence attribute when the user clicks the link; clicking it again reverses the sort order. This defaults to Ascending first, then Descending.

Arranging and Sizing Columns at Runtime

If a Data Table element's Draggable Columns attribute is set to True, users can rearrange its columns at runtime:

When this feature is enabled, as shown above, users can click in the column header and drag the column right or left to a new position.

Columns that can be dragged will include a special icon in their headers, as shown above; depending on the application version, this icon may not be visible until the mouse is hovered over it.

Similarly, in v11.0.519+, the Resizable Columns attribute allows users to drag an icon in the column header, shown above, at runtime to increase or decrease the column width.

The new column arrangement and/or width is "remembered" for the duration of the current session and these features can't be used when there are custom header rows with columns that span multiple columns. The default value for both of these attributes is False.

The Data Table Column element's Condition attribute can be used to dynamically show or hide the column at runtime, and developers frequently want to do this based on the table's data. However, there's an important restriction on this attribute: an expression used as its value cannot include @Data tokens. This is because any tokens used here must be available to be resolved when the table structure is being built but, because the table's datalayer doesn't run until later, there are no @Data tokens available at that time.

One solution is to use Local Data, then @Local tokens would be available when the table structure is being built and could be used in the Condition attribute.

Other types of tokens, of course, can be used in Condition attribute expressions.

Developers can display the summary information at the bottom of a data table in a dedicated row, on every page or just the last page (if the data spans multiple pages). 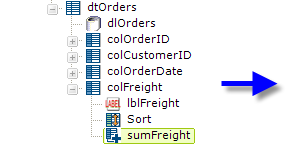 To summarize a data column:

As mentioned above, the summarized value is available using an @Data token. So, the data in the example above would be available as @Data.sumFreight~. However, you do not need to use this token if you use a Summary Row element to display your summarized data. 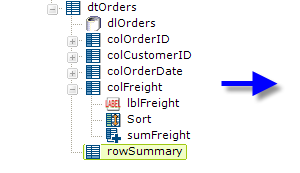 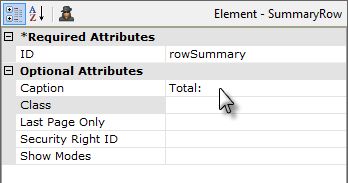 As shown above, the Summary Row element is added as a child of the Data Table (its position in the element tree does not matter) and its attributes are set as shown. This will cause a separate row to appear at the end of the report and its Caption will appear in the first column; the summarized values for each column that has a child Summary element will automatically appear in this row. 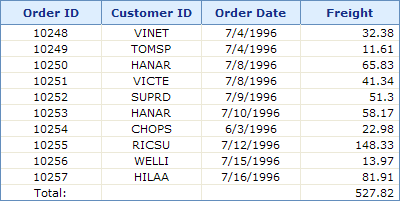 The example above shows the summary row and summarized Freight column value.

It's possible to assign Event Handler elements as children of a Data Table Column. This allows the developer, for example, to capture mouse-related events associated with table columns and dynamically react to them. For instance, a More Info Row (see Data Table Rows) might be made visible or an image or popup panel or menu might be displayed when the mouse is hovering in a particular table column.