The Switch Column element is used with datalayer elements to make data replacements. It's analogous to using both a CASE structure and a REPLACE function in a SQL query but, unlike a query, it's applied to the data after it's been retrieved into the datalayer. This topic discusses use of this element.

About the Switch Column

The Switch Column element, introduced in v10.1.18, is available for use with all datalayer elements and is particularly useful in conjunction with those lacking query capabilities, such as DataLayer.XML and DataLayer.Web Service.

In operation, the element basically searches a specified data column in each datalayer row for a specified value and, if found, replacesit with another value. Optionally, the replacement value can be put into a new column that's added to the datalayer, leaving the original column's data intact.

This is useful for replacing storage-friendly codes, such "1,2,3..." with readable text, such as "Overnight Delivery, Second Day Delivery, Ground Delivery...". or "1, 0" into "True, False". These replacements are temporary (they happen only in the cached datalayer) and don't effect the original data in the datasource, so they're great for increasing legibility in reports.

The following example  illustrates how the Switch Column is used:

First, look at the example datalayer row above which shows the data as retrieved, with a numeric code for the ShipVia field.

Use Multiple and Dynamic Switch Columns

1. Developers can use two or more consecutive Switch Column elements: 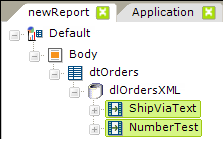 In this case, the operations will be conducted sequentially, based on their arrangement from top to bottom in the element tree. So, after the first Switch Column is applied, rows that may have been changed by it will be evaluated by the second Switch Column.

2. The Switch Column element also has an Include Condition attribute: