The Calculated Column element adds a new column to a datalayer with a value that's the result of a formula, which can include data from other columns, tokens, and literals. The formula is evaluated for every row in the datalayer.

About the Calculated Column

The new column's value is the result of evaluating a formula, for all rows in the datalayer. This calculated value is populated in the new column in every row of the datalayer and can be used in further calculations, Summary Rows, Link Params, etc.

Similar calculations could be performed within SQL queries and may offer better performance when done by the database server. However, the Calculated Column element allows calculations to be performed on data from other sources too, such as web services and data files, that do not themselves offer SQL-like queries.

The attributes for the Calculated Column element are described below:

1. The following example, which calculates sales tax, illustrates how the Calculated Column works: 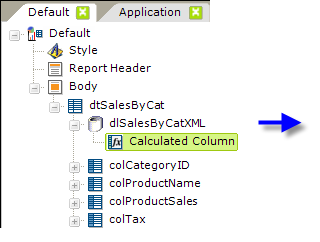 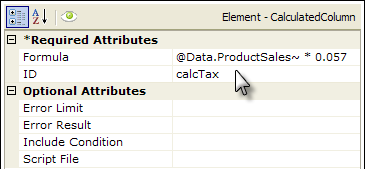 In the definition shown above, a data table and a datalayer element have been added. A Calculated Column element has been added beneath the datalayer and its attributes have been configured so that it will multiply the values in the ProductSales column by a constant to produce the sales tax amount.

The resulting sales tax amount will be placed in a new column, named calcTax, in every row of the datalayer, as shown above. The data will be accessible as the token @Data.calcTax~.

Instead of hard-coding the sales tax rate in the formula, it could be made dynamic using a token, like this:

The following formula could be used to apply different tax rates, depending on other criteria:

Of course, your formula doesn't have to use data from the datalayer. This example simply creates a new column and puts the elapsed seconds for every row for it:

Note the use of the intrinsic CXMLDate function, which is necessary to convert ISO formatted XML DateTime data into a format that works with the DateDiff function (and should be used with DateAdd, DatePart, and other VBScript-based date functions). For more information, see the CXMLDate Function section of Special Functions and Attributes.

The possibilities are endless and allow developers a great deal of flexibility in manipulating the datalayer. 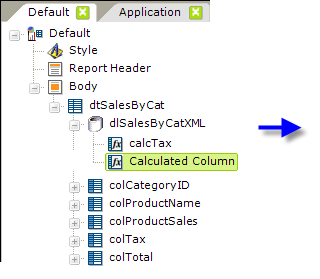 In the definition shown above, a second Calculated Column has been added beneath the datalayer. As you can see, its Formula attribute uses data from one of the retrieved data columns and the first calculated column.

The resulting total amount will be placed in a new column, named calcTotal, in every row of the datalayer, as shown above. The data will be accessible as the token @Data.calcTotal~.

If data or other circumstances cause the Calculated Column's formula to attempt a "division by zero", the resulting value in the datalayer will be NaN, which stands for "Not a Number". This can cause problems or be confusing when the data is visualized.

If this kind of result is possible, developers may want to wrap their formula in an IIF statement to provide an alternative to the NaN result in the data. For example, the formula

tests to see if a division by zero is going to happen and, if so, instead of doing the calculation, supplies an empty value in the datalayer.