The DataLayer.XOLAP Query element is used to predefine a data view based on a Logi XOLAP Cube. It creates the view that will be displayed by a Dimension Grid and can also be used with the OLAP Grid and OLAP Table elements.

The DataLayer.XOLAP Query element behaves a little differently than the usual datalayer in that it does not connect to a datasource and retrieve data. Instead, it works with a Logi XOLAP cube that has already been populated with data (using other datalayers), creating a view of the data for use with other elements.

DataLayer.XOLAP Query is simply a parent element for elements that specify the dimensions that appear on the top and left axes of other elements such as the Dimensions Grid. The order in which dimensions are defined for an axis determines the order in which they are displayed. For example, if a dimension showing "customer city" is provided first, followed by a dimension showing "customer marital status", the user will be able to drill down to a particular city and then drill down on marital status to see measures for each marital status in that city.

The datalayer can also specify which measures will be displayed in the report and can include member properties and filters.

The DataLayer.XOLAP Query element has no attributes other than an element ID (required through v10.1.46).

As mentioned earlier, this element does not retrieve data as most datalayers do. Logi XOLAP operations involve two data-related steps: first, the creation of a virtual data cube (which uses one of the other datalayer types), and second, reporting against that data cube, optionally using DataLayer.XOLAP Query.

If DataLayer.XOLAP Query is not used as part of the second step, then reporting takes place against all of the data in the cube. When it is used, then it defines a view of the data. 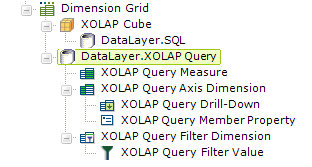 The example above shows a datalayer that retrieves data for the XOLAP cube and DataLayer.XOLAP Query, which is the parent element for a number of elements that can be used to define the data view. The possible child elements are:

Prior to v11.0.727, you could not use a DataLayer Link element beneath DataLayer.XOLAP Query used with an OLAP Grid. This arrangement was not allowed and caused a "pipeline processing" error. In v11.0.727+, the link is allowed.