The Lookup element is used with datalayer elements to perform a "look up" of related data. It runs its own datalayer once for each row in its parent datalayer and joins the results. Unlike a typical join, it doesn't require that all of the target data be downloaded before the join occurs. This topic discusses use of this element.

The Lookup element, introduced in v10.1.18, is available for use with all datalayer elements. It's particularly useful and provides improved performance when trying to join small data sets to very large data sets. For example, when trying to correlate the IDs and names of a few dozen sales people with the employee IDs found in thousands of sales records.

In operation, the element basically runs its child datalayer once for each row in its parent datalayer. In other words, it loops through its entire parent datalayer, performing for each row a "look up" in its child datalayer for matching data. Logi developers who work with Process tasks may recognize this as behavior analogous to the operation of the Procedure.Run DataLayer Rows element.

The following example illustrates how the Lookup is used:

After the look up is complete, the data found by the Lookup element will be available for display, etc. using regular @Data tokens.

The Lookup element also has an Include Condition attribute: 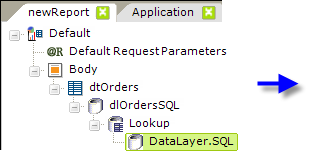