The DataLayer.MDX element allows specification of an OLAP MDX query command that returns a cell set and populates an OLAP Table or OLAP Grid element.

This element is not available for Logi Java applications.

The DataLayer.MDX element is used as a child of either an OLAP Table or an OLAP Grid element.

When used with an OLAP Table only, the text of an MDX query can be entered directly into the DataLayer.MDX element's MDX Source attribute, or generated using the special MDX Query Builder tool, which can be accessed by clicking the browse button at the end of the MDX Source attribute. This tool allows developers to create a correctly-formatted MDX query using a graphical interface, similar to the SQL Query Builder found in DataLayer.SQL.

An alternative approach, when DataLayer.MDX is used with an OLAP Table or OLAP Grid, is to skip entering the query text directly and instead add an MDX Query child element. You can use it and its child elements to specify the dimensions, measures, and filters needed and the Logi Engine will generate a correct MDX query at runtime based on them.

The DataLayer.MDX element has the following attributes:

When working with an OLAP Table element, you can enter an MDX query directly into the DataLayer.MDX element's MDX Source attribute. This query is executed at runtime against the datasource associated with the element's Connection ID attribute.

The example above shows a query in the MDX Source attribute value. As you can see, this type of query is relatively complex and prone to typos during entry. In order to help you formulate a correct query, instead of typing in the query you can use the MDX Query Builder tool, which is accessed by clicking the Browse button at the end of the MDX Source attribute value. 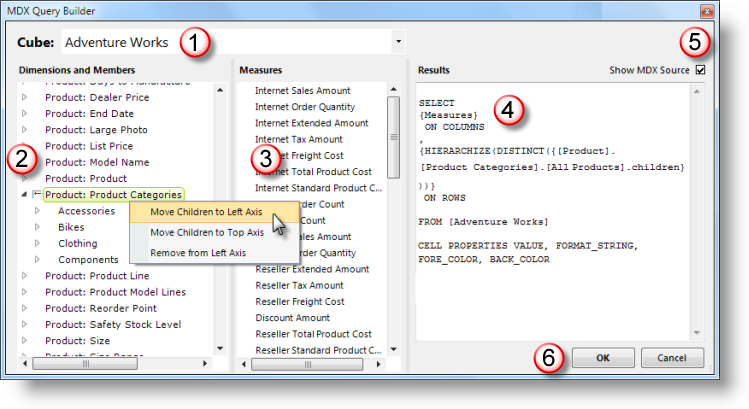 Based on the selected (1) Cube, the MDX Query Builder presents lists of (2) Dimensions and Members, and (3) Measures. These can be moved to an axis or added and removed by selecting and right-clicking them, as shown above. The (4) results of these actions can be seen in the Results panel, in tabular or (5) source code form.

Clicking (6) OK will cause the query constructed in the Results panel to be copied into the datalayer's MDX Source attribute, if the MDX Query Builder was called by clicking the attribute's browse button. Otherwise, the query text can be selected, copied, and pasted elsewhere as needed.

When a Query Was Entered Manually

Note that if you have already entered a query manually in the MDX Source attribute and you then open it in the MDX Query Builder, the tool will try to "reverse-engineer" the query. It succeeds at this most of the time but, if the query includes tokens or is created using a non-standard SQL language, the MDX Query Builder may fail and display an error message. This is especially likely when Logi tokens have been used outside of a SELECT statement.

When working with an OLAP Table or OLAP Grid element, you can have the Logi Engine create the MDX query for you by using DataLayer.MDX and the MDX Query element.

The example above shows the datalayer with its MDX Query child element. The name of the target data cube must be provided, as shown.

Beneath the MDX Query element, you add child elements to define the dimensions, measures, and filters needed, as shown above. When the application runs, the Logi Engine will use these elements to create the appropriate query.