The Fixed File Format datalayer enables retrieval of data from a text file in which the values are in a format specified by column widths. This topic discusses this datalayer.

DataLayer.Fixed File Format is not available in Logi Report.

The DataLayer.Fixed File Format element has the following attributes:

The Fixed File Format datalayer enables retrieval of data from a text file in which the values occupy a certain number of characters and are not otherwise delimited. 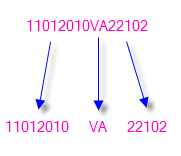 The example above shows data of this type; the first "column" of data is eight characters wide, the second is two characters wide, and the last one is five characters wide. To use the datalayer, you must define the record layout using a Fixed Record Layout element and one or more Data Field elements.

In the example shown above, a DataLayer.Fixed Format File element has been added as a child element beneath a data table and its attributes set as shown. The Fixed Format File attribute will accept a value that's a literal web server file path, with an optional token (as shown above), or a fully-formed URL beginning with HTTP://.

The remaining Data Field elements are then configured to describe all of the data columns. If their Data Type attribute is left blank, the data will be treated as text.

You can add other child elements beneath DataLayer.Fixed File Format and/or its child datalayers to modify the data, including:

The use of many of these modifier elements is described in separate DevNet documents.

The usual data caching mechanism associated with datalayers, in memory and/or on the web server's file system, also applies to this datalayer. This is discussed in The Logi Server Engine and may be of interest to developers working with extremely large datasets or large numbers of concurrent users.

In Logi Info, the Auto Columns element can be used to quickly display in your report all the data in a datalayer. 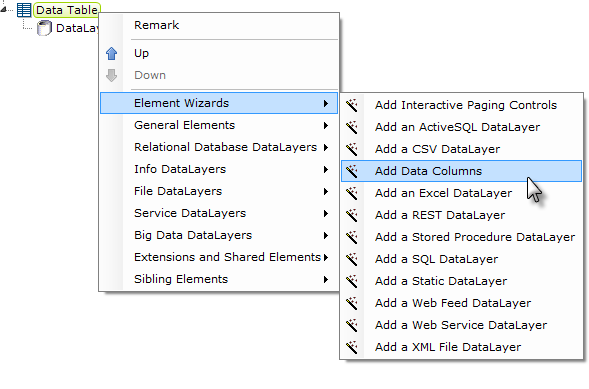