As an application grows in size and complexity, it's often helpful for developers to leave in-line comments and descriptive notes within the definitions. The Note element holds these comments and can be placed anywhere in a report definition; it's ignored when the report is executed. 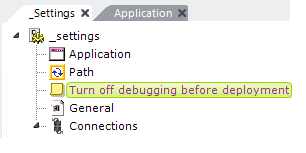 In the above example, Note elements have been placed in the _Settings definition to provide instructions for other developers. Placing the Notes in different levels of the element tree establishes context for the reader, as shown by the final Note element above. Blue is the default note text color, but you can change this using Studio's Tools

During development, it may be helpful to temporarily "comment out" certain elements. The developer can remark a single element or an entire hierarchy of sub-elements in order to temporarily hide them from execution. This can be an important debugging tool as it allows you to selectively prevent execution of parts of the application.

A common troubleshooting technique is to remark a definition repeatedly, successively reducing it down to fewer and fewer basic parts, in order to isolate the source of a difficult-to-find error. 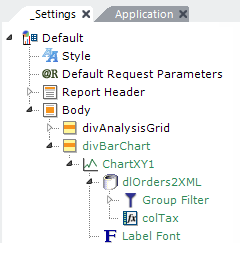 In the example above, the first Divisions in the element tree is active. The second Division element has been remarked and appears in a green font; it is therefore inactive and will not be rendered in the final HTML output. Green is the default color but you can change this using Studio's Tools

Remarked elements do not affect the appearance or functionality of the application but remain present in the definition file. At runtime, the Logi Server Engine ignores remarked elements and they are not rendered into the HTML page output.

To remark an element:

Because elements are structured in a hierarchical tree, if a parent element is remarked, all of its child elements in the tree are also remarked.

It's often useful to write detailed notes about topics that affect the entire application, such as database modifications or session variable names, and the Note element isn't useful for this purpose. Instead there's an Application Notepad for each Logi Studio application. To access it, select to the Application tab in the Workspace panel.

The following formatting options are available when writing application notes:

The Application Notes are stored in a separate .xml data file in the _Definitions folder under your application folder.