The Google AppEngine lets developers run their web applications on Google's infrastructure. App Engine applications are easy to build, easy to maintain, and easy to scale as traffic and data storage needs grow. The Logi DataLayer.Google App datalayer enables connection to the datastore of a published application hosted by the Google App Engine. This topic discusses the datalayer.

The DataLayer.Google App element has the following attributes:

Add the Logi Python File to Your Google Application

Unlike most datalayers, DataLayer.Google App, does not require a separate connection with the Google web service. Therefore, there is no related Connection element that must be used.

The data retrieved with a datalayer is available using @Data tokens, in the format @Data.ColumnName~. The spelling of the column name is case-sensitive. The data is only available within the scope of the parent element of the datalayer, not throughout the entire report definition. The DataLayer.Linked element can be used to make the data reusable in another datalayer outside this scope.

Logi Info developers can make use of the AutoColumns element to quickly see which "column names" are being returned by the web service.

Developers can also view the data retrieved into the datalayer by turning on the Debugging Link in their _settings definition (General element) and using the resulting link at the bottom of the report page to view the Application Trace page. A link on the Trace page will display the retrieved data.

Developers should be aware that they need to take appropriate security precautions and use the account facilities available in the Google App Engine service to ensure that their data is secured.

The following example demonstrates how the DataLayer.Google App element can be used. 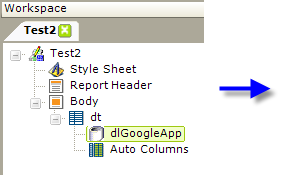 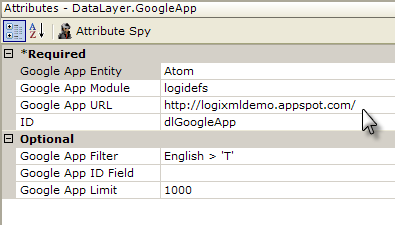 The example definition shown above includes a Data Table and a DataLayer.Google App element. The datalayer's attributes are set as shown. 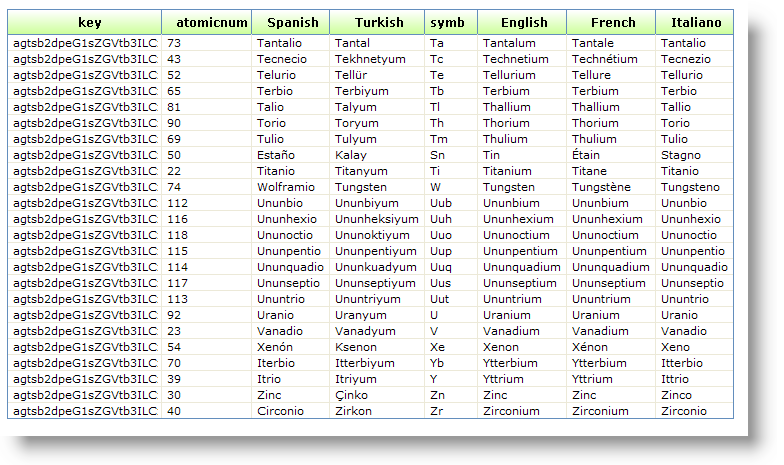 The screenshot of the resulting Logi application table, above, shows the data from the worksheet being used in the sample application.