The Deployment tool is capable of copying all or part of your application to the production server, using either file system commands (to local or shared network folders) or one of three flavors of FTP (standard, SSL, or SSH). In Logi Studio, the details of each operation are called a "deployment target" and they can be saved for later reuse.

The Application Deployment tool is opened in Studio by clicking its menu item, in the main menu's Tools tab, shown above. 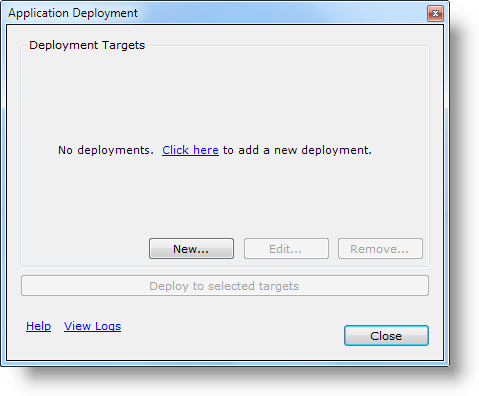 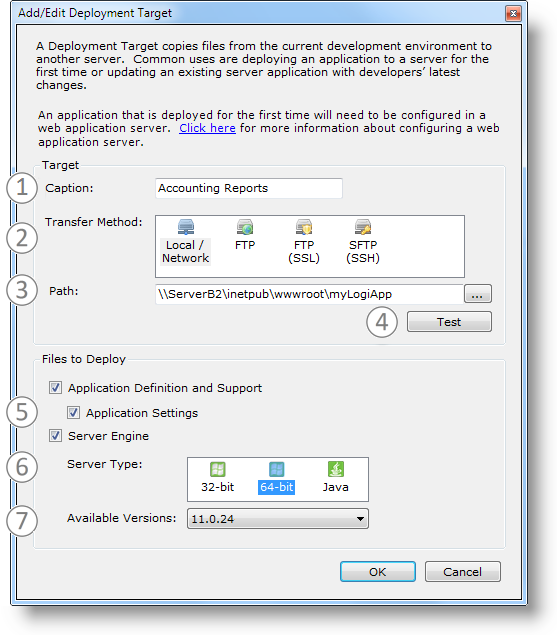 Once a deployment target has been defined, it appears in a list: 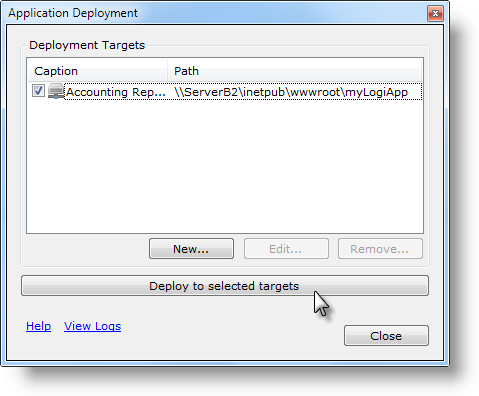 Once a deployment target has been defined, it appears in a list, as shown above, where they can be managed and edited. To run a deployment, check its check box and click the Deploy button. If multiple deployments are selected, they'll run consecutively.

The Deployment dialog box will expand to display the results of the process, as shown above. Text log files, stored in the rdDeployment folder beneath each Logi application folder, are accessible through the View Logs link, and document each deployment.

Finally, the deployment will be complete, and the link to the log file will be displayed.

It's very important that you understand that copying the files, using the Deployment Tool, does not register the application with a web server on the target machine. So, after the first deployment, this has to be done by the developer using Studio, Server Manager, or the web server's tools.

After deployment of a Logi Java application, you can elect to grant 775 (full access) permissions manually on the application root folder and all of its child folders and files. If you prefer a more selective approach, typical Logi application folders require these permissions:

Controlling Which Files Are Deployed

The Add/Edit Target dialog box allows you to select the files to be deployed by category:

Why not deploy all of the categories all of the time? You'll want to do so for your first deployment but, generally, you won't want to for subsequent deployments in order to avoid overwriting files that may have been customized for the production server, such as _Settings.lgx. And, unless you're changing engine versions, deploying the engine files with every deployment is unnecessary and a waste of time. So the tool offers you the opportunity to tailor your deployments as needed.

The Deployment tool will not copy every file in your application folder: 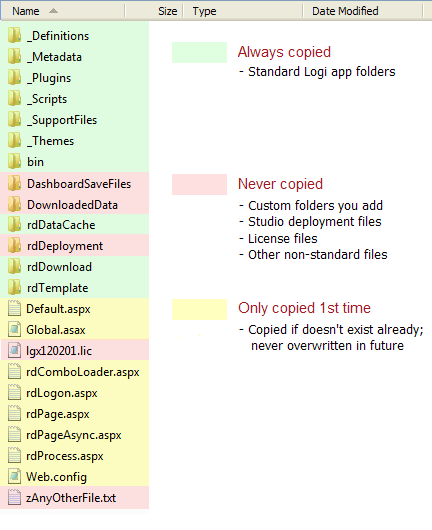 The image above illustrates which folders and files are copied. Files are compared during the process and identical files will be skipped. Of special note is the fact that custom folders you may add to the application, for example to hold Dashboard Save files, are not copied and you will need to create these during your first deployment manually. Other files you may create in the application folder that are not stored in folders will not be copied, as well.

However, developers may want to exclude specific application definition and support files from a deployment, and Studio provides an easy way to do that: 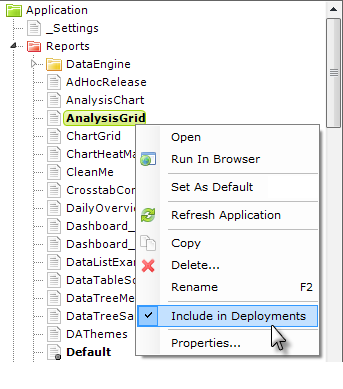 By default, all files in Studio's Application Panel are included in deployments. However, if you wish to exclude a file, select it in the Application Panel, right-click it, and click the Include in Deployments item in the popup menu, as shown above. 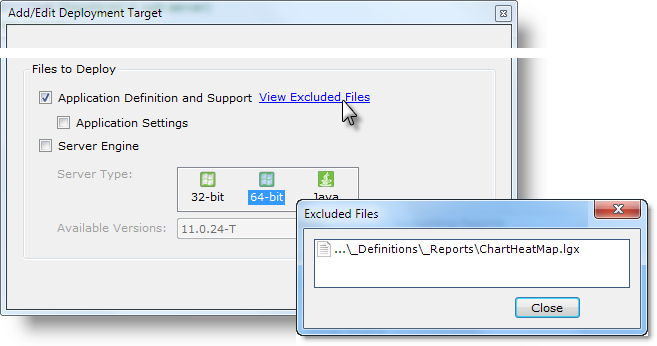 If files have been excluded, the View Excluded Files link, shown above, will be displayed to alert you to this situation when you add or edit a deployment target in the Deployment tool. Clicking the link will display a list of the excluded files.

License files are never included in deployments, so you will have to manually deploy your license file the first time you deploy your application, or configure it to use a centralized license file. For more information about license files, see Product Licensing.

After a First-Time Deployment

After an application is deployed for the first time, you must make some configuration changes to ensure it will run. See Post-Deployment Server Configuration for details.

For subsequent deployments, you need only run the Deployment tool to update the files on the target server.