Application report definition files are normally stored in the yourLogiApp\ _Definitions\ _Reports folder. However, developers can instead specify definitions that come from an external data source, such as a database or a web service, using the External Definitions element. 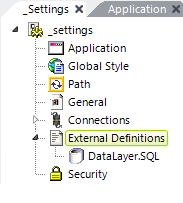 As shown above, the External Definitions element works with its own datalayer, which retrieves the definition data when the application runs. At runtime, the presence of an External Definitions element alerts the Logi Server Engine to automatically include the datalayer's data in the Engine's inventory of report definitions. When the report is called, the Engine will read the definition from the datalayer rather than from the web server's file system and render it.

The stored definition data should be in two columns:

When building the data, the XML could be copied, for example, right from Studio's Workspace, Source tab, and inserted into the datasource. All values are case-sensitive.

To use an external definition, reference its ReportID value (the literal text - "BalanceSheet" - not as an @Data token) in the Report Definition File attribute of elements such as Target.Report.

Why would you want to store your definitions in a database? It's a bit more complicated to update definitions in this arrangement and it isn't necessarily for everyone. However, it does allow centralized storage of report definitions, integrates with Content Management Systems, provides portability in virtualized-server environments, and works well in web server farms, so it definitely has its uses.