SSRM upgrades are usually associated with a Logi Info upgrade and we highly recommend that you upgrade both of themtogether. Upgrading just one or the other will usually result in undesirable effects. See Release Pairings for more information.

If you're upgrading to an early version (pre-v12.5), see Upgrading to Earlier Versions for important details.

If you're upgrading to the SSRM v12.5+, be aware of these important considerations related to the included InfoGo application:

Making backup copies of any InfoGo files you've edited, prior to applying an upgrade, is always highly recommended.

InfoGo v12.7 provides enhanced content management. Visualizations are stored as Bookmarks, which lets them be presented and manipulated in a way consistent with other objects. This makes it easy to edit them, rename them, and duplicate them, and eliminates the need for Gallery and Extra Gallery files.

SSRM 12.7 provides an upgradetool, the Gallery to Bookmarks Migration Utility, for migrating visualizations from gallery files to Bookmarks. When you launch InfoGo for the first time after upgrading to it, you'll see a prompt to run the tool: 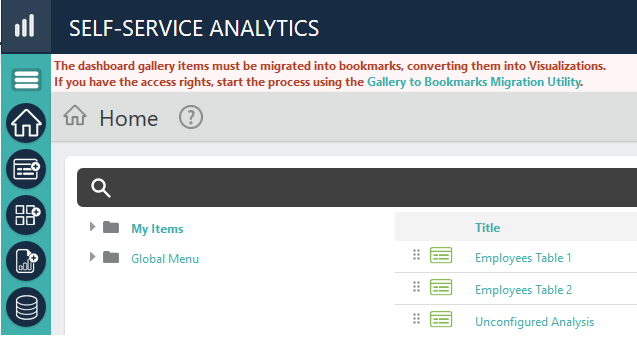 You can also run the utility independently by browsing: /rdPage.aspx?rdReport=rdTemplate/rdGalleryMigration

You must have the "rdBookmarksAdmin" security right to be able to run the utility. Click the link to run it: 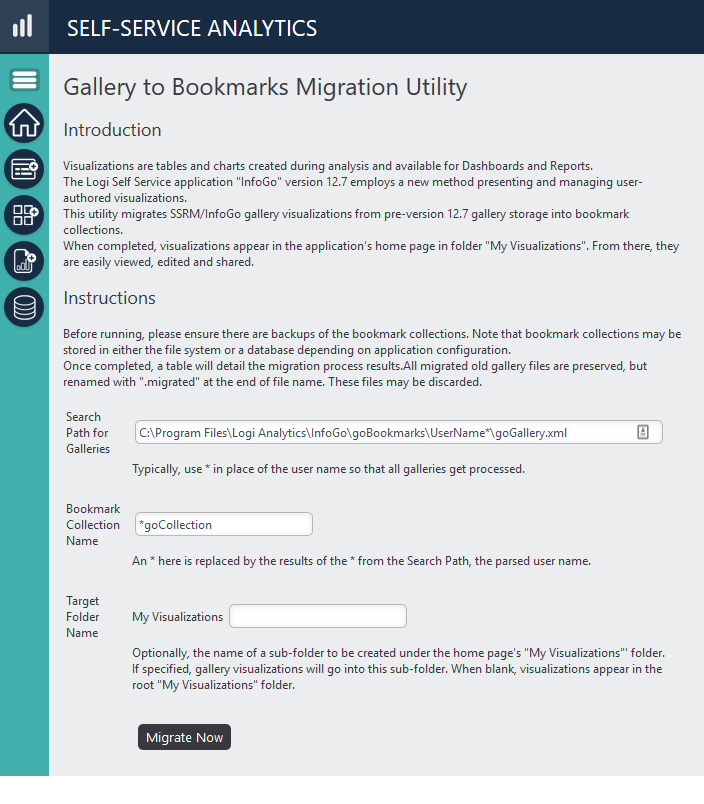 The Migration Utility page is shown above and is fairly self-explanatory, but here are a few key points:

After the migration completes, you'll see the results table appear at the bottom of the page:

As shown in the example above, the results will indicate whether or not the visualizations were successfully migrated.

If your developers have customized gallery files to work with special dashboards, they will most likely need to rework the application to accommodate this change.

After the migration, you may need to perform the following configuration tasks in your InfoGo application:

For Gallery files that have been processed and are retained in place, with .migrated and timestamp added to their file names, those files should be deleted after you are sure everything migrated properly.

Alternatively, you may way to set up this migration through a SecureKey token retrieval code through the parent application, see Configuring the Parent Application. As a temporary workaround to the rdBookmarksAdmin right, you can use the DataLayer.Static element, without making changes to the code: