This part of the custom chart tutorial introduces you to the Custom Chart CLI, how to create a chart with sample code, how to edit the chart’s code, and how to preview the chart. The following steps are performed in Part 1:

Verify that you have everything set up to start creating custom charts with Composer.

To verify that you have valid versions of node.js and npm installed:

If node.js and npm are not installed, go to https://nodejs.org/ and install the recommended version for your operating system.

To install and configure the CLI:

You can specify one of three chart types to get you started:

This tutorial uses the default Single Group template — a chart skeleton with minimal code designed to make you familiar with the basics of the custom chart API.

Complete the following steps to create a single-group custom chart:

Composer’s custom charts are comprised of CSS and JS files that make up the chart’s code. The chart CLI lets you update the chart’s code in the server in one of two ways:

Throughout this tutorial, we continuously modify the code and preview the changes. It is best to use watch mode in this scenario.

Before you can preview the newly created chart in a dashboard in the Composer UI, you must enable it for a specific source.

Now let’s take a look at the new chart in a Composer dashboard.

Your chart should look similar to the following image: 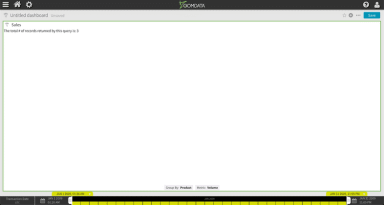 Cool! You have completed Part 1 of the custom chart tutorial. So far, you have learned how to install and configure the Composer custom chart CLI, how to create a new chart with sample code, and how to update its code and preview the results. Continue to Part 2: Query Variables, Chart Defaults, Data Preview, and Data Accessors.