The Chart Canvas element's Series child elements cause a data visualization (the chart) to be rendered in the canvas.

The Series.Bar Range element generates a Bar Range chart, which is commonly used to represent separate events that have starting and ending values, over time. 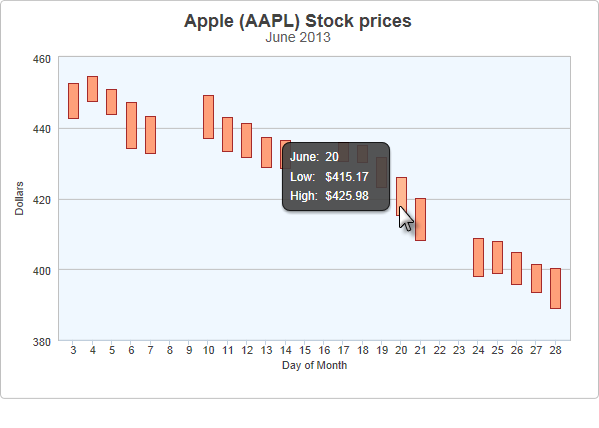 The example above shows a simple Bar Range chart, presenting daily low and high stock prices for a month.

As shown above, the chart is created by adding Series.Bar Range to the canvas, along with a datalayer. Very few attributes need to be set for this Series element in order to produce a basic chart.

A datalayer element can be used either beneath Series.Bar Range, as shown above, or beneath Chart Canvas. If used as a child of Chart Canvas, its data is available to all child Series elements. This can improve performance if you have several series, all using the same data, beneath the same Chart Canvas element.